I remember when this came out in the cinema.  I was totally and utterly infatuated with this film.  I loved everything about ‘The Lion King’. I loved the characters, the animation, the music, and the story.  It was unbelievable when I first saw it at the age of 13.  Now I am almost 30, and the film still makes me feel like I did when I first saw it.  I am still completely in awe of ‘The Lion King’.  And Disney is on a roll now with this 3D takeover, so they are releasing their old catalogue of films on blu-ray as well as in 3D.  In my opinion, ‘The Lion King’ might be Disney’s greatest 2D animated masterpiece.  This blu-ray release is a MUST OWN.

This award winning film is excellent on all levels.  It’s a story of good vs. evil, love, death, betrayal, friendship, responsibility, and innocence.  The story flows smooth and the music is out of this world.  I still sing constantly the music from this film.  The more adult themes and heavier moments of the film have great emotional impact all the while being appropriate and understanding for all ages.  And it is executed to perfection.  I know people who are in their 30’s who still have not seen this movie and to that I say ‘You are a cinematic idiot and I feel sorry for you.”  But for the rest of us, we all know by now the story of ‘The Lion King’.   A baby lion is destined to be king of the land, but his evil uncle Scar, prevents that with betrayal and murder.  And baby Simba is forced to leave his home an never return.  From here he has to grow and realize what he is destined to be.  One of my favorite scenes in the film is when little Simba is in trouble with his father from exploring a place he was strictly told not to go venture off to.  Simba follows behind his father Mufasa and little Simba steps into his father’s giant paw print.  Simba looks at how small in comparison his paw is to his father’s and looks up at him as to say “I will never be the king you will be and I’m so far off from that”.  That single moment still chokes me up.  What brilliant animation and storytelling in that single few seconds.  WOW.  The voice casting alone on the film is superb.  I mean Nathan Lane as Timon is brilliant.  That character might be one of the best sidekicks in cinema history.  And of course James Earl Jones as Mufasa was mighty.  He voiced that character so well.  He was powerful and intimidating, but at the same time he was loving and your best friend.  Jeremy Irons as Scar was so hauntingly epic and scary and conniving.  Literally, everything about this film from the animation to the themes to the music is perfect.  I love this movie so much and I think everyone should see it.  I wish I could buy a copy for the world. 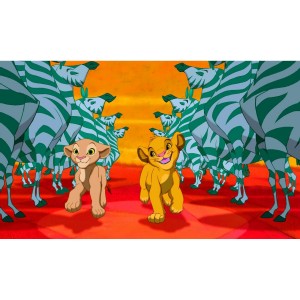 The 3D version of this film is astonishing to a point of beyond excellence.  In the film’s opening scene when the entire jungle is journeying to the unveiling of baby Simba, the depth and textures to everything is just awe inspiring.  A lot of time and a lot of love when in to converting this to 3D.  I’ll tell you this, if this is the way 2D animation looks in 3D, then bring on all the old classics.  This was phenomenal.  The colors are bold and bright and it might be one of the clearest films ever presented on bluray.  I mean you can see the depth in each blade of grass and each animal.  It’s unreal and so beautiful.  The stampede sequence in particular in 3D is very impressive. Everything flows very evenly and very smoothly.  I couldn’t find one flaw really throughout this entire release.  Strictly amazing.  The blu-ray version itself without the 3D looks equally incredible.  The audio comes in an impressive lossless DTS-HD Master Audio 7.1 mix.  The audio on this is not made to bring your house down with how loud it gets, but rather the superb quality of the entire atmosphere in the jungle comes right to your  viewing room.  Everything is well balanced and your speakers will get quite the sound workout, but not in terms of loudness, but in terms of your atmosphere surroundings.  So much depth.  The dialogue is crystal clear and the music and score are jaw dropping.  Not one single complaint.

Like I said before, this might be Disney’s finest achievement in 2D animation.  THis film has it all and still is amazing as ever today.  The hi-def transfer is stunning and the 3D is some of the best I have ever seen.  The audio and visual are all at the top notch and this disc is loaded with amazing extras.  This is a must own.  One of the best blu-ray releases ever.