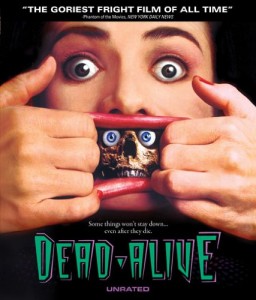 “I KICK ASS FOR THE LORD”!!!  Ahhhhh, finally Peter Jackson’s gore fest is finally on bluray.  This is labeled the goriest film ever made and I must say this is a true statement.  This was Peter Jackson’s answer to Raimi’s Evil DEAD 2.  Jackson perfectly blended horror and comedy and gore all into one brilliant film.  This release is a must own for the sole fact that this is the best the film ever has looked and sounded.  Sadly, there isn’t any extras on the disc sans a theatrical trailer.  Hopefully further down the road there will be an anniversary edition of some sorts with tons of awesome extras.  Would love to see a behind the scenes festurette on this release.

You’ve heard the story before.  Young man lives with mother.  Young man falls in love with girl.  Mother gets bitten by psychotic sumarian zombie monkey.  Mother turns into evil zombie demon.  Mother infects tons of townsfolk.  Young man and now girlfriend save town and kill all the zombie demons.  All’s well that ends well.  I just love this movie so much.  ‘Dead Alive’ will gross you and your friends out to the point of no return.  This film is also known as ‘Braindead’, but the US release is called ‘Dead Alive’.  Jackson perfectly sets the tone early on in the film with its extreme gore and comedy.  It also can’t be brushed off that this project holds a very special place to Jackson’s heart as it pays homage to his favorite horror films growing up.  The movie starts out on Skull Island which is where King Kong is from and is a film Jackson directed in 2005.  It is said to be his favorite film of all time (the 1933 version) which is my favorite film of all time as well.  That and Army of Darkness.    There is just something amazing about two demon zombies fucking on the dinner table and then in a couple of hours that demon zombie chick gives birth to a zombie baby.  I can’t recommend this film enough.  This is a must watch and is one hell of a great time.  This has the best use of a lawnmower in cinema ever. 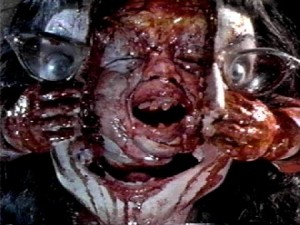 The video is definitely and upgrade, but it seems like it was taken from the DVD master and not a complete remastering of the film.  Noise creeps up here and there and the black levels are sometimes excellent and other times cloudy.  Everything definitely looks sharper and the bright colors pop out more, but it is somewhat muddled to a degree.  Like I said above, I hope there is an anniversary release of the film with a complete new remastering in 1080p and tons of extras.  The audio is a DTS-HD Master Audio mix in stereo 2.0 and sounds pretty good.  It doesn’t get the full effect, but rather sounds like an even playing field on all speakers.  Just comes out flat, but it’s loud, and a lot of fun.  I just hope on a future release, this movie will get the attention it deserves.

Just a theatrical trailer here.  I wish there was more.

I love this film so much I just wish it got the badass treatment it deserves.  The gore and comedy are top notch and this gem of a film will be treasured and enjoyed forever.  This is a must own despite the fact the audio/visual is not 100% and there are no extras, but this is the best ‘Dead Alive’ has looked in quite some time.    MUST OWN!!