Bryan Reviews ‘The Ides of March’!!! (A Movie Review) 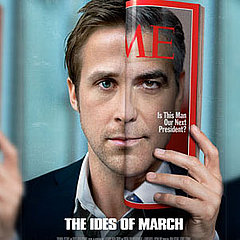 ‘Ides of March’ is one magnificent political drama.  George Clooney directs an all-star cast in this film based on the play ‘Farragut North’ by Beau Willimon.  Clooney also co-wrote the screenplay as well as starred in the film alongside Ryan Gosling, Philip Seymour Hoffman, Paul Giamatti, Evan Rachel Wood, and Marisa Tomei.  This film is perfectly crafted and just left a very unsettling feeling in the pit of my stomach, but in a good way.  The dialogue is some of the best of the year and the acting has gold stars all around.  I wonder if Willimon and Clooney got ideas for this story from real life events.  If that is so, then HOLY SHIT.  That is hardcore.  ‘Ides of March’ might be the best political drama in the past decade.  A must see.  And perfect timing with the upcoming election.  Go see this film.  I loved every single insane and disturbing bit of it.

The film follows Stephen Myers (Ryan Gosling) who plays an idealistic staffer on a campaign for an up and coming new presidential candidate, Mike Morris, played by Clooney.  Myers is the second head employee in charge of the campaign to Paul Zara (Hoffman) who is the head of Morris’ presidential campaign.  Myers loves his job and most of all, he sincerely believes in Morris and his policies.  Morris is a democratic hopeful vying for the nomination but trailing a little bit behind.  Thanks to Myers he is pulling ahead little by little. Meanwhile, Tom Duffy (Paul Giamatti) is the head campaign manager for Morris’ opponent and is trying to plan his candidate’s next move.  Duffy phones Myers secretly and they have a meeting where Duffy asks Myers to switch campaigns and come work with him.  From here, things go insane.  It’s a downward spiral for pretty much everyone involved.  There are twists and turns, cover ups, and tons of betrayal.  But hey, it’s the political game right?

Gosling is one of the best actors of our generation.  He constantly proves time and time again that he is a badass and untouchable in the acting world.  His smooth and sly stagger makes you watch his every move and want more.  He truly shines here.  Also Hoffman is brilliant in this.  There is one scene where Hoffman gives a monologue speech to Gosling and it is just incredible.  Clooney is great too, but I don’t think he was at 100% on his acting due to his two other jobs on the film (directing and writing).  Evan Rachel Wood  and Marisa Tomei shine throughout the film as well.  They aren’t in the film much, but when the are , they’re golden.  And Paul Giamatti is satisfyingly sinister.  He plays it so well.  This was one fine cast Clooney rounded up.

‘Ides of March’ is by no means a representation of the real current political campaigning going on right now.  The republican party is not even portrayed in the film.  This is more about the truth of what it takes to win an election and all of its disgusting and deplorable details and tactics.  This film is full of wit, suspense, and drama.  It is very smart and definitely a lot of fun to watch.  Never a dull moment in this film.  I highly recommend seeing this film.  It will spark conversation and emotion.  Wonderful film.