Bryan Reviews ‘Phineas and Ferb: The Movie: Across the 2nd Dimension’!!! (A Blu-Ray Review) 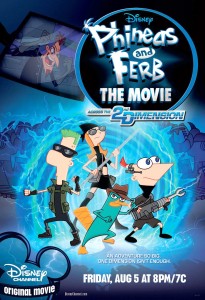 I am too old for the Phineas and Ferb craze and culture, but I must say that this cartoon movie and the cartoon itself is quite spectacular.  Don’t get me wrong.  It is silly and stupid, but I can totally see this cartoon on Cartoon Network’s Adult Swim line up.  It just needs the little push to become a little more raunchy and it will totally have it.  Phineas and Ferb I believe started in 2007 and this film ‘Across the 2nd Dimension’ was released earlier in 2011.  These crazy characters and hilarious and exciting adventure prove that Disney’s Phineas and Ferb can not only be loved by the young ones, but by teens and adults.

Let me first say that fucking Richard O’Brien is one of the main voices on the show.  Now if you don’t know that name, then you are a cinematic and theatrical idiot and I feel sorry for you.  Richard O’Brien created ‘The Rocky Horror Picture Show’ and all  of its music.  He also played Riff Raff in the film.  That is some geeky nerd awesomeness right there.  As soon as I found he was in it, I kinda loved this show and movie a little bit more.  Richard O’Brien isn’t the only big name to lend their voice to this show, but we will get to that later.  In this animated adventure with a sci-fi twist — based on Disney Channel’s Emmy Award-winning comedy series “Phineas and Ferb” — stepbrothers Phineas and Ferb go on their biggest journey yet, into another dimension! When the boys finallydiscover that their beloved pet platypus Perry is in fact a secret agent who battles the forces of evil daily, they join him on a grand adventure that blasts them to another dimension where a truly evil Dr. Doofenshmirtz has taken over an alternate Tri-state Area. When they uncover his ploy to travel back to their dimension to take over their Tri-state Area, the gang, as well as their alter-egos, must band together to stop him. Meanwhile, Candace is convincedthat she will lose Jeremy before he heads off to college.  I mean you can’t go wrong with this plot and characters.  It’s something totally straight out of an Adult Swim animated series or a Nickelodeon show from back in the early 90’s.  You might recognize the voice talent of Vincent Martella, Ashley Tisdale, Jack Mcbrayer, Caroline Rhea, Kelly Hu, and the rock god Slash as himself.  Now, I don’t care how old you are.  If you get Slash and Richard O’Brien in the same room, you no gold will be the result. 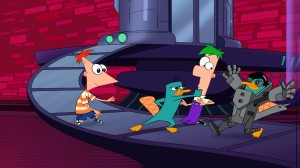 The video has a 1.78:1 aspect ration and enhanced for 16×9 tvs.  The picture isn’t as sharp as it could be, because it is not on blu-ray, but it still looks decent.  There really wasn’t any noise or flaws.  THe colors were vibrant and well saturated.  The blacks were as inky as they could be.  The audio has a Dolby Digital 5.1 mix and sounds full and dynamic.  This is an action packed cartoon, so expect some fun levels of noise on all speakers.  It all sounded even and the same even if there was dialogue and score combined which is a minor complaint, but I don’t think it will detract from its targeted audience. 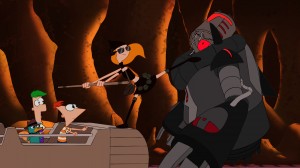