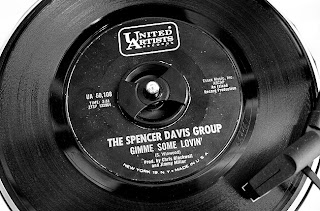 You’ve no doubt heard this classic at some point in your lifetime, either on your parent’s oldies station or somewhere in a movie. It’s a great catchy tune from the 1960s that is infectious from the instantaneous pulse of the booming bass line to the drive of the sleek and captivating organ. There’s also no doubt that The Spencer Davis Group’s “Gimme Some Lovin'” song is one of the greatest jukebox hits to ever be recorded, and one that belongs in everyone’s extensive record collection.
What’s always been fascinating about this song is the age of Steve Winwood when this song was recorded. Winwood was in his mid-teens by the time the band recorded and released this hit, which to me is an astounding feat, considering I could barely operate a vehicle at that age, let alone write hit songs and perform in an extremely popular band. Sort of goes to show how different the times were.
Winwood’s Hammond B3 Organ and high tenor vocals grab you by the throat from the start, and won’t let go until the very last second.
The American version (record seen here) is actually quite different from the European release. The American release of “Gimme Some Lovin'” features overdubbed cowbell, hand claps and backing vocals, and the sound fuzzes out just a bit, as if the engineer deliberately wanted an overblown sound coming out of a 747 jet engine. The recording can be a bit much at a high volume, but is still great none-the-less. Below is an audio clip of the original UK release, which has a much cleaner monophonic sound. You can also hear the organ and Winwood’s distinctive vocals much more distinguishable in this version.

I really like the cleaner sound of the UK release, but still quite partial to the loud, jangly overdubs of the American release, as this is the record I grew up listening to. 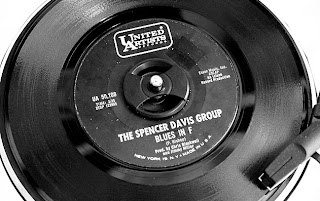 What else makes this single a real treat is the fantastic B-side, “Blues In F”, which in my opinion belongs on the A-side of a whole other record. “Blues In F” is a swanky little tea room orchestra jazz jam that really showcases Winwood’s organ playing chops, as well as fluid bass playing of Winwood’s brother, Muff Winwood. The number ends up being a fun departure from their typical ‘Beat’ music excercises, and shows off the band’s more than obvious R&B and Jazz influences.

“Gimme Some Lovin'” peaked at No.2 in the UK charts and No.7 in the US (unfortunately), and has been covered by numerous bands over the years, as well as been featured in countless films and commercials. The record continues to cook on jukeboxes everywhere, you better believe.