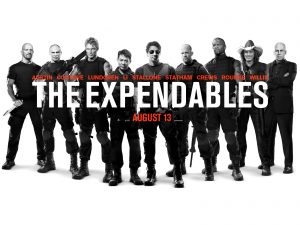 So the huge action packed star studded insane action film ‘Expendables’ is getting a sequel.  If you saw the last film, you might have noticed Bruce Willis and Arnold Schwarzenegger in a small and short cameo appearance.  We reported last time that both Arnold and Bruce will be back for the sequel with much larger roles.  Well Sly Stallone has confirmed that he has got Jean Claude Van Damme and Chuck Norris to sign on and come aboard which is turning out to be the biggest most epic action film EVER.

We’ll have a big showdown between me and Van Damme, which has been anticipated for a long time, so it should be a good one.  We’ve got Chuck Norris and I think Nic Cage… We’re trying to work out different scenarios. I like using people that had a moment and then maybe have fallen on some hard times and give them another shot. So we’re always looking for actors like Michael Biehn and Michael Pare. I like those kinds of guys. Someone did it for me and I like to see if I can do it for them. We also need some new blood in there, a Navy Seal-type, because with the Expendables none of them have 20-20 vision anymore. They need some help, man.  [A John Travolta appearance is] possible. The one thing I’ve learned is what is a fact on Monday is a complete fallacy on Tuesday. A lot of it is scheduling. It’s not financial. It’s just that Bulgaria is definitely a jaunt. It’s a commitment, you know what I mean? Especially in the dead of winter.

Donnie Yen is also in talks to come aboard, but nothing has been set in stone yet.  This sequel is shaping up to be insane.  Stallone has a lot of good friends to want to head out to Bulgaria to film in the cold winter.  Hopefully everyone agrees to come aboard.  And I think that by Stallone not directing this one will give him the chance to focus more on his acting.  Excited to see all the insane news from this movie.  Keep it safe guys.