West Memphis 3 Filmmakers To Change Ending As Decision Is Handed Down!!! 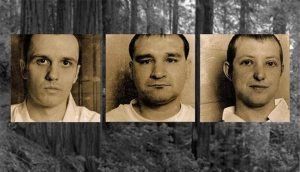 The award-winning HBO documentary series “Paradise Lost:  The Child Murders at Robin Hood Hills” (1996) and “Paradise Lost 2:  Revelations” (2000) spawned a worldwide movement to free the West Memphis 3 for wrongful murder convictions.  Set to debut on HBO in Jan. 2012, “Paradise Lost 3:  Purgatory” will have its theatrical premiere at the Toronto International Film Festival, with a number of prestigious festival dates to follow this fall.  This film tells the entire story, from the arrests in 1993 to the growing movement, through the entire appeals process and the uncovering of new evidence, concluding with their release.

As Damien Echols notes in the film, if not for the “Paradise Lost” documentaries, “…these people would have murdered me, swept this under the rug, and I wouldn’t be anything but a memory right now.”

On May 5, 1993, the bodies of three eight-year-old boys were found next to a muddy creek in the wooded Robin Hood Hills area of West Memphis, Ark.  A month later, three teenagers, Jason Baldwin, Damien Echols and Jessie Misskelly, were arrested, accused and convicted of brutally raping, mutilating and killing the boys.  Fraught with innuendoes of devil worship, allegations of coerced confessions and emotionally charged statements, the case was one of the most sensational in state history.  The films sparked a national debate regarding the innocence or guilt of the West Memphis 3.

With the support of HBO, the filmmakers have stuck with the story over an 18-year period, making these compelling films in order to continue to shed light, raise awareness and spur debate about the events that transpired at that time and in subsequent years after the convictions.

“Eighteen years and three films ago, we started this journey to document the terrible murders of three innocent boys and the subsequent circus that followed the arrests and convictions of Baldwin, Echols and Misskelly,” said director and producer Joe Berlinger.  “To see our work culminate in the righting of this tragic miscarriage of justice is more than a filmmaker could ask for.”

Added co-director Bruce Sinofsky, “Today, we, along with HBO, are humbled to be a part of this remarkable outcome.”

Premiering at the 1996 Sundance Film Festival, “Paradise Lost:  The Child Murders at Robin Hood Hills” went on to win many accolades after its HBO presentation, receiving Emmy® and Peabody Awards, and a DGA nomination, among other honors, and was named Best Documentary by the National Board of Review.