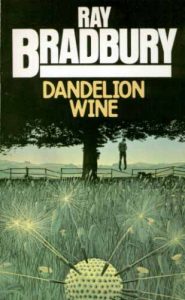 Bradbury, who turns 91 on Monday remarked, “This is the best birthday gift I could ask for. Today, I have been reborn! ‘Dandelion Wine’ is my most deeply personal work and brings back memories of sheer joy as well as terror. This is the story of me as a young boy and the magic of an unforgettable summer which still holds a mystical power over me.”

Bradbury continued, “I have followed Mike Medavoy’s film career for many years. Many of his films are among my favorites. I am extremely happy that our paths have crossed and that Natasha, Rodion and I will be working together with Mike and Doug on ‘Dandelion Wine’.”
Medavoy recently produced Martin Scorsese’s SHUTTER ISLAND and the acclaimed BLACK SWAN, which won numerous awards including an Academy Award and Golden Globe for Best Actress Natalie Portman. He’s currently in production on the high-concept comedy “What to Expect When You’re Expecting” (Starring Cameron Diaz and Jennifer Lopez), which McKay is Co-Producing. “Doug McKay was very instrumental in getting this project launched,” said Bradbury. “He has earned my respect for his love of literature and for believing so strongly in ‘Dandelion Wine’.”

“I have known Ray for a long time and I’m a huge admirer of both his body of work and his talent. I couldn’t be happier to be a part of this project,” said Medavoy.  Ray Bradbury’s iconic writing (DANDELION WINE, MARTIAN CHRONICLES, FARENHEIT 451, among others), exemplifies American imagination at its most creative level. Bradbury’s awards include: The World Fantasy Award for Lifetime Achievement, and most recently, The Commander of Arts and Letters Award from the French government. Bradbury has also received The National Medal of Arts (the highest award from the American government) and an Emmy for the animated version of his novel “Halloween Tree.” Ray Bradbury was also nominated for an Academy Award for his screenplay MOBY DICK.

Nahapetov stated, “I was deeply honored when Ray Bradbury chose me to write the screenplay adaptation for his novel ‘Dandelion Wine.’ When I began my studies at the Cinema Institute in Moscow, many foreign books were banned in Soviet Russia. Still, I decided to make my short film based upon “Dandelion Wine” because this novel represented to me the childhood I never had. My childhood had been stolen by the ravages and destruction of post World War II Russia and “Dandelion Wine” restored it back for me.”

This is just excellent news.  I love Bradbury’s ‘Dandelion Wine’.  This is one of my favorite’s of his work.  I hope more films of this merit happen in the next few years.