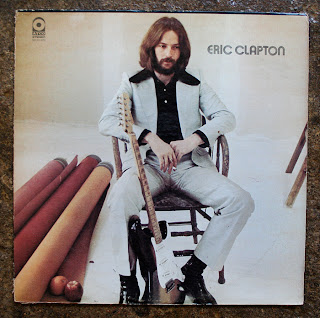 Times are really tough for a lot of folks in the world, right now. I mean, where does one even begin to break up the black clouds circling overhead? How much more bad news can we, as a people, take in one sitting? I honestly don’t want to know the answer to that question, but it is times like these that I can take refuge in my record collection, especially when my collection has this gem of an album by Eric Patrick Clapton.

I’m sure by now most music fans are familiar with the guitar genius of Eric Clapton, via his unsurpassed talents with bands The Yardbirds, John Mayall & The Bluesbreakers and Cream. However, “Slowhand” has been recording critically and commercially successful album as a solo artist for nearly four decades, and his first self-titled LP proved (and still proves) that Clapton is indeed, God.

By all accounts “Eric Clapton” is a star-studded, all-nighter blues rock album that really introduced Clapton to the world, not only as a superb solo act, but also as a very gifted and emerging songwriter, as well. The collaboration and guidance of Delaney Bramlett (of Bonnie & Delaney) makes many of these recordings as some of the best booze and blues fueled music ever committed to tape, like the album’s opener “Slunky”, which sounds as loose and raw as the song title suggests. “Bad Boy” and “Lonesome And A Long Way From Home” are two wonderful horn-laden blues numbers cleverly disguised as what could be upbeat church gospel songs despite the lyrical cry of sadness and depression. 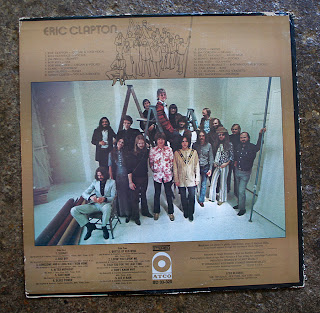 The record produced three major radio hits that still garner massive radio play today, like the J.J. Cale penned tune “After Midnight”, which is the quintessential all night boogie song in my opinion, as well as “Blues Power” and the beautiful and endearing Clapton/Bramlett composition “Let It Rain”. The all-acoustic treat “Easy Now”, which should be a radio hit, as well, sees the start of Clapton’s weakness for well-crafted ballads that would follow him to this day.

What I really love about this record is the fact that it is the precursor to Clapton’s next band, Derek & The Dominos, as Clapton ‘helped’ himself to Delaney Bramlett’s band for his own, and of course, rounding out the roster by throwing guitar genius Duane Allman into the folds. Both records ooze such a warm and glowing southern comfort that has rarely been captured by any other rock band of this or any era. I also love the insecurity in Clapton’s voice in songs like “Lovin’ You Lovin’ Me” and “I Don’t Know Why”, as he felt unsure about his vocal ability at the time. You hear a very young man making an honest attempt at expressing himself the best way he can. 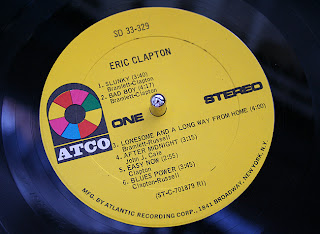 Like most classic and timeless records throughout the years, eventually they see some sort of expanded anniversary edition, which is what came of “Eric Clapton” in 2006. The original album was mixed and engineered by Tom Dowd, however the expanded deluxe CD edition features both the original Dowd mix on disc 1, and the previously unreleased Delaney Bramlett mix on disc 2, including some unreleased nuggets worth giving a listen. There are some interesting surprises between each mix, though sadly the expanded version has yet to see an official vinyl release. Real audiophiles will definitely want to enjoy this record on vinyl as well as the expanded CD version. Heck, even the casual fan will enjoy both versions, too.

Time and time again this album reinforces the idea of why I own records, why I spend countless hours and dollars building upon my record collection for those good and bad days ahead.  There are very few records that pass through your fingers and ears, redefining what it means to be a music fan and a human being making it through life. “Eric Clapton” is one of those records, and by the end it lets you know everything is going to be ok.