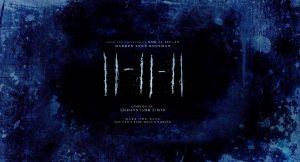 We did some coverage on this film a while ago which you can read HERE.  This film looks scary as hell.  It is from the director of ‘Repo: The Genetic Opera’.  It should be good.  Here is a look at the newest trailer for 11-11-11.  “After the tragic death of his wife and child, famed American author Joseph Crone travels from the United States to Barcelona, Spain to reunite with his estranged brother Samuel and dying father, Richard.”

“However, fate has a different plan for Joseph as his life becomes plagued with strange happenings, and the constant sightings of the number 11. Curiosity quickly turns to obsession, and Joseph soon realizes that this number holds a horrific meaning not only to himself but possibly to all of religion. Isolated in a foreign country with only the support of his companion, Sadie, Joseph soon realizes that 11/11/11 is more than just a date, it’s a WARNING!”

I am sufficiently creeped out. Never heard of this movie but something is very familiar… remind me what other movie dealt with numbers that sucked? I hope that this one rises above with a feeling reminiscent of Constantine mixed with End of Days. I hope my friend (who is praying for her baby to be born on 11-11-11) does not shit her pants.