Director Darren Lynn Bousman who you might recognize his previous work such as: Saw 2,Saw 3, Saw 4, and the ever popular Repo: The Genetic Opera has been hard at work on his next film.  The film in question will be a horror/thriller called 11-11-11.  Like the date.  From the looks of it, it is going to be a journey into the darkest parts of HELL.

You can check out Bousman’s website HERE to find out more info on the film.

The trailer is all sorts of creepy.  The visuals are stunning and haunting and I think are what some recent horror films are lacking.  This film is shaping up to be great and one true horror film. 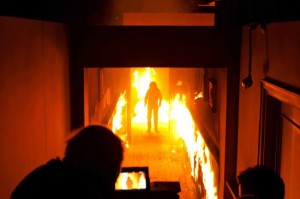 Here is an official plot description:

“After the tragic death of his wife and child, famed American author Joseph Crone travels from the United States to Barcelona, Spain to reunite with his estranged brother Samuel and dying father, Richard. However, fate has a different plan for Joseph as his life becomes plagued with strange happenings, and the constant sightings of the number 11. Curiosity quickly turns to obsession, and Joseph soon realizes that this number holds a horrific meaning not only to himself but possibly to all of religion. Isolated in a foreign country with only the support of his companion, Sadie, Joseph soon realizes that 11/11/11 is more than just a date, it’s a WARNING!”

Watch the trailer below.