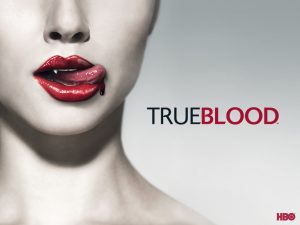 ‘Me and the Devil’

True Blood episode “Me and the Devil”, while good in its own right, was clearly a filler episode. It moved and built up the many story lines that the show is working this season. On that note, it almost feels like the show is trying too hard to keep this many story lines going and keeping them interesting. The episode itself felt rushed and hurried. The transitions from scene to scene were abrupt and not what I’m used to when watching True Blood. Each scene basically gave us 5 minutes with each story line. It was a little on the frustrating side. It was like getting a massage five minutes at a time, when it starts to feel good it changes. But again as a whole I did enjoy the episode. Now on to a re-cap of the story lines!

We watch as Tommy kills both his parents in self defense. Which honestly I’m totally cool with and am tickled pink that we won’t have to see Jo Lee in his undies ever again. Though, I am kind of bummed about his mother’s death. I liked her, she was tragic but did the best she could give her situation as an abused woman. And Tommy’s remorse at killing his mother shows a different side that we had yet to see in his character. And of course, this patricide is used to bring Tommy and Sam closer together. While disposing of the bodies we also learn that Sam has killed two people. He tells us this when trying to comfort Tommy and convince him that he isn’t going to burn in Hell. Oh we also learn that gators love marshmallows…

Arlene and Terry decide to have their home blessed because Rene’s ghost is haunting them through the baby. Again, credit where credit is due, last weeks  “Baby not Yours,” scene, actually freaked me out a smidge. Kudos.  Reverend Daniels and Lettie May come in and bless the house with a ghost busting tambourine and sage. When all is said and done, things seem more peaceful in the Bellefleur house hold. Well except for the spontaneously combusting matches. Guess Lettie May and Reverend Daniels didn’t get up in the corners where the evil hides.

After a disastrous encounter in the woods (poor Pam, but more on that later) Jesus decides it’s in their best interest to go to Mexico and ask for help from his grand father.  When Lafyette asks why they are looking for someone that Jesus hates, we then learn that when he was a child his grandfather gave him a taste of power. A taste of nummy goat blood too, but hey there was power there! And Jesus feels the best person to help with angry vampires is his Brujo grand daddy who still is inMexico with a very pregnant woman.

Not much happened with Jason this episode. He and Hoyt shared a moment of conversation, where Jason is convinced that God punished him for having too much sex with hot women. He then becomes concerned when he over hears that full moon is the next night. Oh, we get an uber weird sex dream that involves Jessica and Hoyt.

Speaking of these two, nothing is resolved between them. Jessica is distant with Hoyt because of the guilt she feels for glamouring him in the last episode. Hoyt feels the distance but of course has no idea what’s happened.

Our lovable werewolf gets a visit from the Shreveport pack master. The head wold is upset that Alcide has yet to register with the pack. Alcide informs the alpha male that he is doing the lone wolf thing and it suits him. The pack master is none to happy to hear such a thing and lets Alcide know of his displeasure. Alcide basically says too bad so sad, now go away. Setting us up for wolf on wolf drama in later episodes.

We found out last week that the two shared a blood line. This week Portia shows up and tries to convince Bill that they can still continue to have sex because there were married cousins in Bon Temps who shared more DNA than they did. In the end, Bill glamours the girl into believing that she is terrified of him and she runs screaming out of his home.

Tara didn’t see a lot of episode time but she did make her presence known. And we found out that her girlfriend in New Orleans just found out her real name. But to be honest, this story line seems the least developed. All we know is that Tara has a girlfriend who thinks her name is Toni. Sure we can chalk it up to the fact thatTara hates Bon Temps but surely there is more to it than that.

Poor Pam was cursed to rot. She runs to Bill who suggests that  maybe a little lipstick would cover the gaping rotting hole in her face. Of course she wants permission to kill Marnie, but Bill refuses. But he does have the witch brought in for questioning. We find out that she really doesn’t know how to lift the spells that she has cast on Eric and Pam and just wants to peacefully practice her religion.

Bill calls a meeting of the Louisiana sheriffs to discuss the witch matter. They of course scoff at it until one vampire tells them all about a massacre in Spain where one witch called vampires into the day light to burn. Then the assembled all agree that Marnie must die. Bill of course refuses and with out full though, Pam erupts and accidently spills that Eric’s memory had been wiped. Bill confronts Pam about this knowledge and finds out, much to his disbelief, that Eric is at Sookie’s.

This week we got more goodies from Sookie and Eric. It starts with Eric’s bad dream with Godric, which ends with him spooning with Sookie till sun rise. Sookie also takes time to visit Marnie, the troublesome witch. In this scene Sookie’s Gran informs her that Eric’s condition is temporary and that Marnie is dangerous.

Later, Tara and Sookie are having a heart to heart when Eric wakes up and strolls into the room. Tara flips out and goes on a tirade of Eric’s misdeeds and then storms out. Eric, distraught over the things he has done leaves. But Sookie chases after him and calls him back. The two then begin kissing, much to my delight.

Over all I did enjoy the episode. It built up the different story lines and left us wanting more. It was a filler episode but things did happen, and the thought of Bill walking in on Sookie and Eric just fills me with glee. I still stick with that it feels like this season is trying to do too much. Except for the transitions though, it also seems that it is doing too much well. I look forward to next week’s episode. Especially when Bill finds Eric with Sookie.

See you ghouls next time…