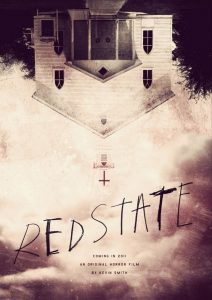 Production company Lionsgate has teamed with Kevin Smith and his SModcast pictures company to help distribute his latest and greatest thriller picture, ‘Red State’.  If you remember from Sundance this past year in a what turned out to be joke auction for his film, Kevin Smith paid himself $20 dollars for the theatrical distribution rights for his ‘Red State’.

The film has made over $1 million dollars from only 15 or so screenings from around the country where Kevin Smith has taken the film on the road to packed audiences.  After viewing the film he does a two hour Q & A.  I was fortunate enough to sit front row at the Kansas City screening back in March.  Stuff happened.  It was beautiful, man.  Read my REVIEW HERE.

“Under terms of the new deal, Lionsgate obtains rights to distribute the title on all packaged media, video on demand, subscription video on demand, electronic sell-through and TV in the US, while SModcast retains theatrical rights.”  The film is expected to hit the on demand services in September and hit theaters in October of this year.

As you will read in my REVIEW HERE, you will see how fucking AWESOME this film is and how Kevin Smith let his talent run wild.  Truly one of the best film experiences of my life.  I wish I could by ticket a for the word to see ‘Red State’.