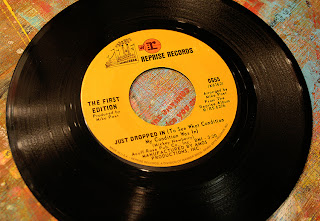 It’s the song Joel and Ethan Coen made beyond famous in their 1998 cult film hit “The Big Lebowski”, all with the thanks to musician and producer T-Bone Burnett for plucking this gem out of near obscurity, and the absolute one song that has been on my ‘I-must-own-this-record-if-it’s-the-last-thing-I-ever-do’ list. It’s also the one song in the history of music that gives some shred of coolness and dignity to Kenny Rogers, despite the many terrible country cross-over songs we’ve been subjected to all these many years. “Just Dropped In (To See What Condition My Condition Was In)” is the epitome of awesome regardless of where it’s been or who has sung it.

Newberry was primarily known for his country songs, many of which explored dark themes and undertones. The lyrics and music in a more psychedelic laced “Just Dropped In” is believed to reflect the the effects of LSD, and was written to warn off potential users of the drug. With the mesmerizing intro of Beatles-like backwards looped guitar chords and the contorted and mashed guitar playing of Glen Campbell, the song may have made people even more excited about the drug’s allure and nature. The idea seems pretty solid, given the interpreted dream sequence in “The Big Lebowski” that features the tune, as seen here (film clip may contain some stuff little kids probably shouldn’t see or hear just yet):

Despite “Just Dropped In” being out of the ordinary from the typical polished country harmonies The First Edition was known for, the song managed to be a top 5 hit for the band in 1968, their highest reaching single of the band’s existence. Rogers also claimed Jimi Hendrix said ‘it was his favorite song of all time.’ 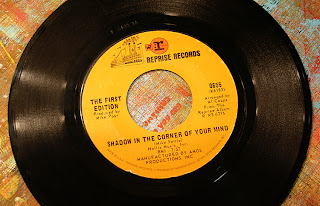 On the flip side to “Just Dropped In” a very contrived Mamas & The Papas-sounding “Shadow In The Corner of Your Mind” tune is one of those songs that permeates typical AM Radio playlists, a folk-y rock tune that isn’t entirely bad, but really doesn’t deserve to be the B-side to the awesomely psychedelic “Just Dropped In”. With all it’s worthwhile harmonies and jangly acoustic guitars and tambourine, “Shadow” ends up falling flat, like a discarded ‘could be’ theme song for the Monterrey International Pop Festival. A first-time listener might even suspect it’s a different band all together and want their money back.

“Just Dropped In (To See What Condition My Condition Was In)”, for all intents and purposes, should have been a single MONO A-side/STEREO B-side release without “Shadow In The Corner of Your Mind” ever seeing light of day. The lead guitar parts sound spectacularly mind blowing in either mix, and Rogers’ vocals give the song a rocker’s authority obviously not present on any of his other records. However, despite the lack-luster dribble that is “Shadow”, “Just Dropped In” will go down in history as one of the finest recording achievements ever committed to wax, and will forever be synonymous with Jeffery Lebowski, AKA ‘The Dude’. I honestly don’t know if T-Bone Burnett could have chosen and saved a more perfect song for pop culture history.

And in case you were wondering, yes…this record really does tie the room together.

One thought on “Classic Waxxx: The First Edition “Just Dropped In” (Single)”