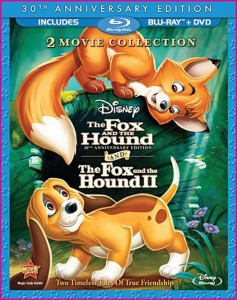 Disney has announced that they will be releasing “The Fox & The Hound” on blu-ray in honor of the 3oth Anniversary.  Wow this film came out 30 years ago.  1981.  That is the year I was born.  I really loved this original film.  I am so happy Disney is releasing this in hi-def.  Disney has detailed the extras and specs for us to enjoy.

There will be a 3-disc version which will consist of a bluray disc that contains both films and two DVD’s with each film on it.  Then a set with no bluray for those of you who haven’t upgraded yet.

“The release will be available as a Blu-ray/DVD combo pack in 1080p video, a DTS-HD Master Audio 5.1 soundtrack, and supplements include three featurettes (Unlikely Friends, Passing the Baton: The Making of The Fox and the Hound, and The Making of the Music), The Best of Friends Sing-Along Song, and a music video “You Know I Will” – Lucas Grabeel.”

It looks like August 9th will be the date that this will be released.  Amazon currently has the set going for $27.99 which is currently 30% off the SRP.  Also Amazon is offering a $5 dollar off coupon for pre ordering bringing down the bluray set to $22.99.  Not a bad deal.