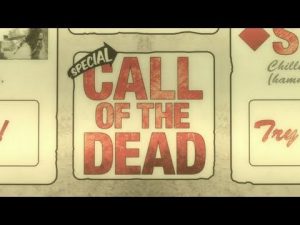 In Multiplayer, battle it out in “Hotel”, on the roof of a Cuban luxury hotel and casino against the vivid backdrop of old Havana; “Convoy” delivers intense, close-quarters combat at the scene of an ambushed US military convoy; “Zoo” takes you on a wild ride in an abandoned Soviet Russian Zoo, with danger at every turn; “Stockpile” pits players in a remote Russian farm town housing secret WMD facilities.

For Zombies fans, “Escalation” features a unique Zombies experience: “Call of the Dead”. Play as the zombie-killing dream-team of Sarah Michelle Gellar, Robert Englund, Michael Rooker, and Danny Trejo against a new and unnerving zombie menace. Set in a mysterious ice-covered remote Siberian island and inspired by legendary writer and director George A. Romero, a group of four fearless explorers fight for their lives amidst an army of bloodthirsty Russian zombies.

The Escalation Content Pack will be available first on Xbox Live on May 3, 2011.”

WOW.  What a cast.  The trailer is just as awesome as the above reads.  It was made in the same style as the Grindhouse films.  Oh I can’t wait.