‘Layla’ Still Has You On Your Knees 40 Years Later 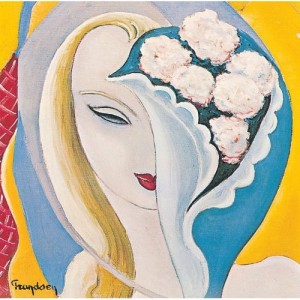 Since the birth of recorded music there are very few albums in the world worthy of being purchased at least five times in your life with the advent of a new format. Fortunately, like a finely aged double-malt whiskey, Derek & The Dominos’ “Layla & Other Assorted Love Songs” is one of those albums, and this year it is celebrating its 40th Anniversary with a slew of deluxe multi-format packages, prodding die hard Eric Clapton and rock n’ roll fans to buy it just maybe one more time.

March 29th sees the release of an expansive edition of one of Eric Clapton’s career-defining albums, offering a comprehensive look of this timeless masterpiece and the fantastic band who masterminded it.

For the hard core rock geek in you, the one that wants every little nugget of recorded music available, feast your eyes uber-awesome 7-disc mega deluxe edition, featuring a double 180 gram vinyl of the album from the original UK mixes, four CDs of studio and live tracks, a DVD of the albums in 5.1 surround sound, book of essays with rare photos, extended liner notes and new interviews, concert ticket facsimiles and an art print of artist Emile Theodore Frandsen de Schomberg’s cover painting ‘La Fille Au Bouquet.’

If the swanky packaging and extra goodies aren’t enough to convince you to buy ‘Layla’ all over again, perhaps the never before released live recordings from their November 1970 appearance on the ‘Johnny Cash Show’, including a cover of “Matchbox” with Cash and Carl Perkins, will? Or, how about the rare Phil Spector produced versions of ‘Tell the Truth’ and ‘Roll It Over,’ that were originally released as singles but quickly pulled from circulation? How about the remastered and expanded live set of ‘Derek and the Dominos: In Concert’ from The Fillmore, and unreleased tracks that were intended for The Dominos’ second planned album?

Whatever the case may be, if you are most looking forward to the rare and unreleased music on this superb anniversary collection, or are anxiously awaiting to discover the power and glory of this monumental classic for the very first time, this collection is sure to please your eyes and ear holes for another 40 years to come, and further prove why this album is the masterpiece it is and always will be.

NOTE: Look for the single disc, two disc deluxe set and digital versions to hit stores on March 29th. The Super Deluxe 4CD/DVD/2xLP edition is slated for release on April 26th. Also, look for a special Record Store Day exclusive 7″ featuring “Got To Get Better In A Little While” b/w “Layla” from the new anniversary collection on April 16th at independent record stores nationwide.