Move Over Billy Mitchell and Steve Wiebe. There is A New Donkey Kong Champion in Town!! 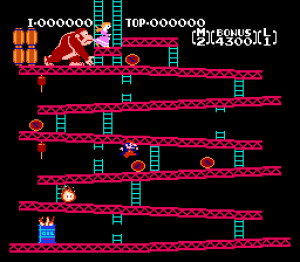 One of my favorite and I think one of the best documentaries ever made was “King of Kong: A Fistful of Quarters”.  It followed two men on their journey to attain the highest score of Donkey Kong.  Knowing that, it really is a story of GOOD VS. EVIL.  But since the documentary where Wiebe beat Mitchell(the champ for highest donkey kong score) , and then Mitchell beating Wiebe for the title back, the newcomer, Hank Chien (a plastic surgeon) defeated Mitchell for the title only to have Mitchell take the title back from Chien.  Bu then Wiebe stole the title from Chien this past September only to be knocked back down to 2nd place by Chien this past January.  WHHHHEEEEWWWW!!!  This new documentary is about Hank Chien.

Now this isn’t really a follow-up to King of Kong, but rather a separate documentary on the “new guy” who has proven he is able to play with the best in the world at Donkey Kong.  Director Alexis Neophytides began making this film back in 2009 before Chien took the title.  At its inception, the project was simply intended, as Nintendo Life put it, “as a character study of this odd guy who would show up at a local bar in Brooklyn dressed in scrubs to practice Donkey Kong.”

The film is called “Doctor Kong: Cutting Up The Competition”.

After watching the trailer, Chien is extremely likeable.  He is one hell of a goofy laugh and just generally looks like he is enjoying life.  I cannot wait to see this film.  I hope they screen it in Dallas.  Click HERE TO goto the film’s website.

And check out the trailer below.