Guillermo Del Toro and His “At The Mountains Of Madness”!!!

The film is based on the H. P. Lovecraft novella about scientists who come across malignant, mutating aliens during an expedition to Antarctica.  Universal gave money to Guillermo for pre-production creature designs, but remained unwilling to give the big “greenlight” for Toro to actually start making the film.  this is mostly in part due to the film’s giant budget and “R” rating. 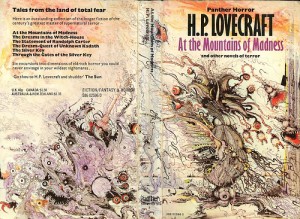 Monday, Guillermo withdrew from negotiations and said, “Madness has gone dark. The ‘R’ did us in.”
“Del Toro envisaged “Madness” as a “hard R” epic, shot in 3-D, with a blockbuster budget. Creating dozens of morphing creatures would be expensive, and much of the film needed to be shot somewhere that approximated Antarctica; one of the most disquieting aspects of Lovecraft’s novella is that the explorers are being pursued by monsters in a vast frozen void, and del Toro wanted to make the first horror movie on the scale of a David Lean production. But a “tent-pole horror film,” as del Toro put it, hadn’t been made in years. High-budget productions such as “Alien” and “The Shining” had been followed by decades of cheaper thrills. “The natural flaw of horror as a genre is that, ninety-nine per cent of the time, it’s a clandestine genre,” he said. “It lives and breathes—‘Texas Chainsaw Massacre,’ the first ‘Saw,’ ‘The Blair Witch Project’—in dark little corners that come out and haunt you. Rarely is there a beautiful orchid that blooms.” He mentioned Hitchcock’s “The Birds”: “It was a major filmmaker using cutting-edge optical technology and special effects. It was a big-budget movie. It had Edith Head designing costumes, it had all the luxuries. And it was appealing because it had all the polished aspects of a studio film.”
Guillermo said that he would not compromise on the rating stating that it’s not about the gore, but more about the artistic freedom to make the film really uncomfortable and nasty.  He was hoping that this film would mark a golden age for films.

Universal said the film would need to make $500 million dollars to make a profit.

Adam Fogelson (chairman at Universal) said, “” He called del Toro’s presentation “one of the more extraordinary and gratifying professional experiences I have had.” Fogelson went on, “The kind of movie Guillermo is looking to create is not something there’s been much of in the recent past. But I think anyone working in this business right now would acknowledge that attempting to follow a prescribed formula is not less scary than talking a walk across a virgin landscape. There are no sure things. There are no—or very few—easy, obvious safe bets. And what we’re looking to do here is, we want to make great films. We think great films make great business.”
Now over at Deadline, there is an excellent interview with Guillermo about the whole debacle where he discusses his disappointment in not getting the greenlight to make “Madness”.  Not all is lost, since his project, “Pacific Rim” already has the go ahead and will begin shooting very soon.