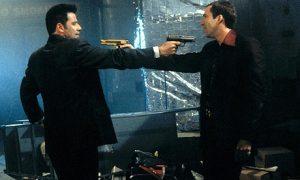 If only it were to be a sequel to Face Off directed by John Woo with all the white doves and slo-mo we could handle.  Sadly that is not going to happen.  Well at least anytime soon.  But, the two actors who have such great chemistry on screen, and play well off each other are in talks to star opposite one another in not just one film, but two films in the coming future.

According to Vulture, Nic Cage and John Travolta are in talks to team up an star in a film called “Shrapnel”.  This film is supposed to be director John McTiernan’s return to the directing chair.  McTiernan is known for directing films such as: “Predator”, “Die Hard”, and “The Hunt For Red October”.  Shrapnel is about a Bosnian soldier who seeks revenge on an American who wounded him, by running his own war game on a supposed friendly hunting trip. If McTiernan does in fact return and all the legal issues he has goes away, this film will be fucking BADASS.  Especially with McTiernan, Travolta, and Cage on screen.  Can you say ultimate BADASS???

The second film is called “Sea Trial” which is based on the novel by Frank De Filetta.  This novel from the 80’s is about a couple on a cruise who are not who they seem to be.

It would be awesome to see these two on film again in the same movie fighting each other.  You know FACE OFF was a lot of fun.  You want the sequel or the next best thing.  Admit it.