Best Picture Winner, “The King’s Speech” Is Getting Edited Down For A PG-13 Rating!!! 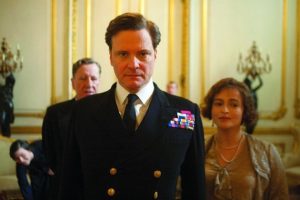 First off, let me say Congrats to “The King’s Speech” and to everyone who worked on the film.  It was indeed a great movie.  Even though it was not my choice for BEST PICTURE, it is a great film.  But recently, some of the powers that be have signed off to re-cut and edit “The King’s Speech” to get a  PG-13 rating.  And a lot of people are not happy about it including the film’s actors and crew.

According to EW and Hollywood Reporter, Tom Hooper, Helen Bonham Carter, and Colin Firth are all against this edit.  And most rightfully so.

Tom Hooper stated that he is not a fan of this edit and express large disdain for the edit as well as saying he will not at all cut the film.

Helen has said she is not a fan of the re-cut of the film to get a lesser rating.

Colin Firth said, “I think the film has its integrity as it stands.”  He also stated that “I still haven’t met the person who’d object to it.  I am against it.”

Well the Weinsteins have signed off on the edit and there is pretty much nothing anybody can do at this point.  It’s a sad day when stuff like this happens.  Too much censorship.  It eats and kills the life out of everything.  Sometime the only word you can use is “FUCK”.  It is the perfect word sometimes.

Back in the 1930’s when Rhett Butler told Scarlett O’Hara he “didn’t give a damn” was considered crazy and offensive. Can you imagine that being cut away or changed??