Apple Unveils The iPad 2 And The Reasons I Will Not Be Buying One!!! 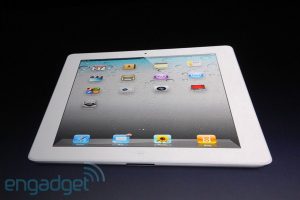 The much anticipated Apple conference for the new iPad launched today.  It is called the iPad 2.  Now I love Apple.  I am a big proponent for Apple and their products.  I use Apple products for personal and business use everyday. They simply are the best.  Now with that said, with the launch of the new iPad 2 only days away, I’m not that excited about their upgraded product.

Steve Jobs surprised everyone by showing up at the iPad Apple conference today.  Recently he took another leave of absence from the company due to I think was medical concerns again.  But he none the less showed up and looked normal.  Everyone was glad to see him up on stage again.

One of the first things Jobs talked about was that Random House Publishing is joining iBooks in bringing over 17,000 titles their way for download.  This is pretty cool and will definitely be used.  Glad to see this.

Then they got to the real part of the conference.  Unveiling the iPad 2.

– they added a camera….so there is a rear and front facing camera on the iPad

– they added one color you iPad option….black or white (Michael Jackson Rejoices from the grave)

– new iPad 2 will have a HDMI output

Now all those things are extremely cool and definitely needed for an upgrade, but when you upgrade a product you should want to upgrade a little more than the above.  Basically Apple has kept the same iPad, but just called it the iPad 2.  Let me break it down for you again:

– same hard drive space meaning they didn’t increase the amount of information (music,movies,files) you can put on your new iPad

Now when I go into wanting a new product, I expect upgrades to be more like the ones I mentioned right above.  I will not be buying the new iPad 2 because it did not increase its hard drive space, not does it have a usb port, and they did not increase the battery life.

When they upgrade the hard drive space is when I will seriously consider buying this product.  Until then all the iPad 2 is the same old iPad but with a 2 added to it.

This is of course only my opinion.

They ship out March 11th.