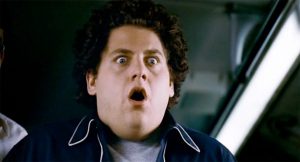 Funny Actor, Jonah Hill, wants to direct his first film called “Kitchen Sink”.  It is a horror/sci-fi film with vampires, zombies, and aliens.

The script was written by Oren Uziel.  He wrote two Mortal Kombat films.  The story is about zombies and vampires who have to put aside their differences and band together to fight off an alien invasion.

The title says it all to me really.  This is sounding like one fucking awesome funny film.  I wonder since Jonah Hill will be behind the camera, if it will tend to be more of a comedy with tons of horror/sci-fi esque geek trivia and references riddled throughout.  Jonah I hear is a huge movie lover and I think that passion he harbors will make this film quite BADASS.

Looking forward to this.

Read the whole article over at Heat Vision.