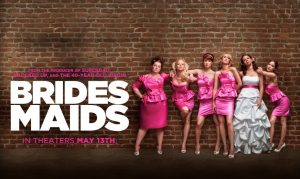 This trailer for BRIDESMAIDS is pretty fucking hilarious.  I just hope that the full feature film will be as funny as this trailer.

It looks kinda like The Hangover but with women instead of men.  This has sort have been done before, but it looks like the Hangover formula for women might be a huge success just like The Hangover was.  This movie is being produced by Judd Apatow and directed by Paul Feig who have worked together before on Freaks and Geeks and Undeclared and quite a few other projects.  I think they have put something together that is hysterically funny.

It has a stellar cast that includes Maya Rudolph as the bride and Kristen Wiig as the single woman who is asked to be the maid of honor and goes in over her head in planning the events prior to the wedding.  Wiig also wrote the screenplay with Annie Mumolo.

CLICK HERE FOR THE HILARIOUS BRIDESMAIDS TRAILER IN GLORIOUS QUICKTIME!!!!

This film comes out in May!!!

Cannot wait to see it.