Find Out Who The Current Top Choices Are For Lois Lane in the Upcoming Superman Film Are!!!! 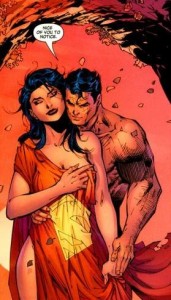 As stated in a previous post, Henry Cavill will be putting on the red cape and stopping crime as the new Superman for director Zack Snyder (300,Watchmen, Sucker Punch).  Now we need to find our Lois Lane, Jimmy Olsen, Braniac, and Lex Luthor.  The casting for Lois Lane is narrowing down and we have a look at who the choices are.

One name that is NOT on the list still pisses me off to no end.  And that is Selma Blair.  She is perfect for the role of Lois Lane.  Not only does she look the part, but she is a classically trained actress and has already been in comic book films before.  See Hellboy.

But she is not on the list.  But the next few actresses are:

Kristen Stewart – Yes the chick from the Twilight series and Adventureland.  I can’t see it.  She is just kind of blah.  A wet noodle so to speak.  Plus  I think she has tons of work on her plate at the moment.

Malin Akerman – You remember her from Watchmen as Silk Spectre 2.  A fairly good choice considering she has worked with Zack before, but I just don’t see it happening.

Jessica Biel–  The beautiful actress from The Illusionist, Blade 3, and the revamp of Texas Chainsaw Massacre.  She is super sexy, knows how to be an action star, and very charismatic.  I would say she would be in the top of the runnings.

Rachel McAdams – The chick from The Notebook, Mean Girls, Wedding Crashers, and Red Eye.  I believe she is also a strong contender being that she has been in a few Warner Bros. films and that she was very close to being cast in Nolan’s Dark Knight.  Could be good.

Mary Elizabeth Winstead – She was amazing in Scott Pilgrim and would bring so much to the table.

Kristen Bell – Veronica Mars and Forgetting Sarah Marshall is where you know her.  Her charm and beauty and wit goes a long way and i think she could definitely pull it off.

Rosario Dawson – She would just kick all sorts of ass at this role.  I’d hire her in a second.