Another Big Star to Join The Cast of NBC’s The Office!!! Find Out Who!!!

Seems like a trend here over at The Office in that they announce a big star to come on board the day before an episode is aired.  Last week it was Ricky Gervais.  This time it seems that it will be America’s favorite “ANCHORMAN”.

That’s right.  Will Ferrell will star in four upcoming episodes of The Office.   He will be playing a Sabre Branch Manager. 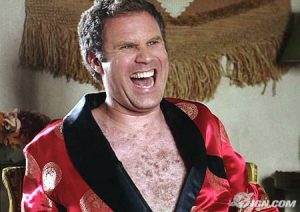 Have we seen Steve Carrell and Will Ferrell together since Anchorman??

UNIVERSAL CITY, Calif. – January 26, 2011 – Comedic actor/producer/writer Will Ferrell will guest-star over an arc of episodes on NBC’s Emmy Award-winning “The Office” (Thursdays, 9-9:30 p.m. ET) as a branch manager who arrives from the home office and proves to be just as inappropriate as Michael (Golden Globe winner Steve Carell).

Ferrell will re-team with Carell, who co-starred with Ferrell in the feature film “Anchorman: The Legend of Ron Burgundy.”

“We found Steve Carell when he was nothing but a movie star and we turned him into a television star,” said executive producer Paul Lieberstein. “We are proud to continue ‘The Office’s’ tradition of discovering famous talent, and we hope that once America gets a good look at Will, they’ll see what we see: tremendous raw sexuality.”

Ferrell, who began his career with The Groundling improvisational troupe, later became a featured star on NBC’s “Saturday Night Live” where he created a host of popular characters. While there, he ventured into many hit feature films that also include “Wedding Crashers,” “Elf,” “Talladega Nights: The Ballad of Ricky Bobby,” “Bewitched,” “Old School,” “The Producers,” “Step Brothers,” “Semi-Pro,” “Kicking & Screaming,” “A Night at the Roxbury” and “The Other Guys.”

Ferrell and partner Adam McKay launched “Funny or Die,” a well-known comedy video website. He is also executive producer of the comedy series “Eastbound & Down,” and “Funny or Die Presents” with Gary Sanchez Productions for HBO.

Looking forward to the comedy.