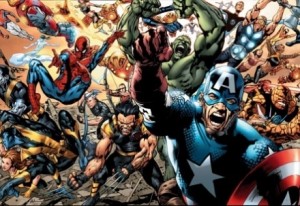 Less than an hour after their primary competitor announced an across the board price drop from $3.99 to $2.99.  Marvel Comics today also announced at least a partial move away from the often criticized $3.99 price for new serialized superhero comics.

During the ICv2 Conference On Comics & Digital – a Thursday afternoon industry pre-event to New York Comic Con – Marvel Senior Vice President of Sales & Circulation David Gabriel confirmed that new books launching in January 2011 will not debut at $3.99. “A lot of talk I’ve heard [today is] about the pricing increases overall…because of the digital comics sales, prices will decrease,” he said as part of a panel whose focus was “Print Vs. Digital.”

Gabriel prefaced the announcement by outlining some of Marvel’s broader successes in the downloadable comics space since launching their dedicated iPhone and iPad application in April. “This week we passed 2 million downloads [of the App,]” the VP explained, noting that the overall interest “does not translate yet into 2 million downloads today for books.” However, as a point of comparison, he said that weekly sales of comics on mobile devices have come close but not surpassed the sales of Manhattan retailer powerhouse Midtown Comics – one of the biggest accounts Marvel services in the direct market.

The sales online were particularly strong for the trial runs Marvel has done on day-and-date releases like this week’s “Ultimate Thor” #1. “We found that in a week’s time, the download of the day-and-date comics were a little bit less than what Midtown orders. They’re one of the top retailers in the country, so it gives you an idea of where we’re at.”

Gabriel added that by tomorrow, digital sales of “Ultimate Thor” will have surpassed the amount sold to the biggest accounts Marvel works with.

Doubtlessly, the $3.99 versus $2.99 price debate will be a big part of the discussion around New York Comic Con just as the general price increase has been a somewhat controversial move in the eyes of fans and retailers, particularly as summer sales of single issue comics have taken a noticeable downturn.