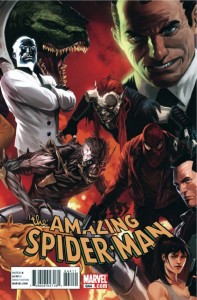 AMAZING SPIDER-MAN #644 – Mark Waid and Paul Azaceta continue in the third issue of the Origin of the Species arc.  Since Marvel created the “Spidey Brain Trust” and the thrice-monthly schedule over a year ago, many new characters and plot-lines have developed to create this Spider-Man universe.  Waid has found a unique way to throw many of Spidey’s past foes at him all at once in this issue.  Spidey is not only swinging through NYC to escape with his own life, but he’s on the run to save the baby of Norman Osborn and Harry Osborn’s ex-girlfriend, a baby with unique Goblin serum properties (and a huge ransom)…oooh, creepy!  This is a particularly emotional issue with some of the confrontations with his enemies, particularly the cool twist at the end.  I really wasn’t excited about Azaceta’s art the last couple of issues but it has developed nicely, especially with the amazing coloring job.  Azaceta’s pencils are really tight and he has a real knack for illustrating big camera shots and fast-paced action well.  I really thought this issue was a fun read and I can’t wait to read next week’s issue!  (4 out of 5) 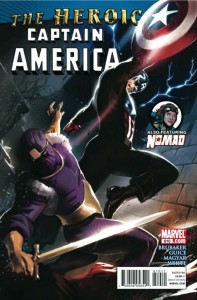 CAPTAIN AMERICA #610 – First of all, check out that killer cover.  Cap’s vibranium shield smacking Baron Zemo upside the face is brutal!  Ed Brubaker has had me cheering for Captain America again with the conclusion of his last arc, “No Escape.”  The last four issues have been the story of how the new Baron Zemo found out that his father didn’t exactly kill Bucky (current Captain America) back in WWII like he originally thought.  We get to see Zemo’s true intentions and feelings toward Bucky in this issue, and it may not be the strict revenge plot that you’re thinking.  This was such an awesome issue and it has this insanely cool “pulp” feel to it, particularly with Butch Guice’s pencils.  I was really bummed when Steve Epting left the book as his version of Captain America was definitely my favorite by far…but Guice has really impressed me big time here.  I could honestly care less about the Nomad back-up story as it has little if anything to do with what’s going on in Captain America and I’m very happy that they’re switching gears and having a Black Widow back-up next issue…ahh, much better.  Been away from Captain America for a while?  Come back pronto as it’s getting absolutely awesome again.  (5 out of 5) 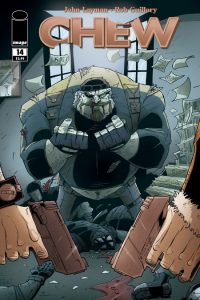 CHEW #14 – Always one of my favorite indie/creator-owned series since it debuted, Chew has never dipped into suck territory.  John Layman writes a tight story and has an awesome sense of humor.  The main character, Tony Chu, is a cibopath, which means he receives psychic impressions from whatever he eats…yes I said WHATEVER he eats, as it never fails that he’s put in some pretty cringe-worthy gustatory situations.  The series takes place in a slightly alternative world where the FDA is the top-police force after the Bird Flu epidemic cripples the world.  Tony is a FDA agent/detective and his cases are always in that crazy “oh wow, why didn’t I think of that?” mode, especially centering on the illegal post-Bird Flu chicken production/trafficking.  This is an interesting title as it is definitely meant for adults in it’s graphic nature, but it’s just so ridiculously fun.  Rob Guillory has this really unique art style that can take the violent or grotesque subject matter and twist it into dark comedy awesomeness.  This issue features the return of Tony’s ex-partner Mason Savory as well as a really funny back-story concerning Tony’s past love life, is it possible to wince and laugh at the same time?  By no means was this a bad issue at all, but it wasn’t quite at the top of the heap of Chew books so far, but keep this original series coming!  The creative team assure us we’re in for a sweet 60-issue run.  (4 out of 5) 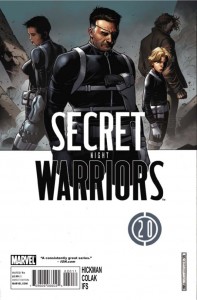 SECRET WARRIORS #20 – The Secret Warriors is the covert team directed by Nick Fury who has been “underground” in the Marvel U for a number of years now.  Jonathon Hickman is a supremely intelligent writer (loved his amazing indie mini-series The Nightly News) who honestly writes above my head at times as he weaves together so many characters and plot-lines that it is hard to keep up without constant charts and graphs, haha.  When this series first started, it was really just about how badass Nick Fury is and the development of his new core team of covert operatives, but the series slowly built up to including multiple enemy forces (Hail Hydra!) and his own set of sub-teams with their own unique code names.  The cast in this series is HUGE, particularly at only 20 issues in.  This is the penultimate arc of the series, and I highly recommend following along in trade format where you can digest entire arcs together.  I wonder if this will ever receive the omnibus treatment from Marvel one day, as this would be best read all at once.  If this series had more of a focus on Nick Fury, Dum Dum Dugan, and the Howling Commandos, I’d easily give this a top rating, but considering how confusing this is all getting, and how the art has taken a dip in quality, I’m only giving this a (3 out of 5) 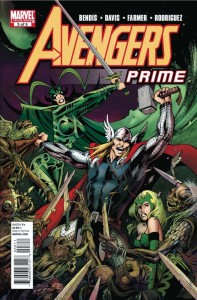 AVENGERS PRIME #3 (OF 5) – Marvel had decided to retool/revamp their Avengers franchise with the cancellation of all their past Avengers books and then starting Avengers, New Avengers, Secret Avengers, and Avengers Academy, all with new #1 issue numbering.  And as if four new series weren’t enough to contain all the subsequent Avengers mythos, Brian Michael Bendis has been releasing this Avengers Prime mini-series with legendary artist Alan Davis.  It may be premature of me to say so, but this has been my favorite new Avengers title out of the list and sadly it is only a 5 issue mini.  This story centers around the holy Marvel trinity that is Captain America (Steve Rodgers), Thor, and Iron Man.  Bendis’ dialogue is top-notch, especially with Tony Stark’s monologue with a huge dragon creature as I really felt that Robert Downey Jr. biting dry wit (an instance where the movies have actually positively affected the source material back again).  The three heroes are stuck in one of the nine realms beyond Asgard (as it has fallen recently in the Siege storyline) and it is still a mystery as to what is truly transpiring here.  Davis’ art is SO good, very classic pencils with modern coloring techniques makes for some awesome comic art.  I am salivating for the next issue…thus initiating my first official Pick of the Week here at Boomstick Comics!  (5 out of 5)