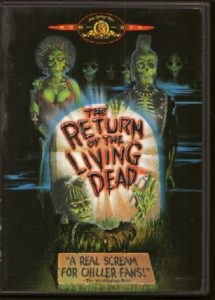 A couple of decades before Shaun of the Dead and Zombieland made audiences scream and laugh at the sight of zombies eating your flesh and brains, Return of the Living Dead paid tribute to the horror frenzy of Romero Zombie films that came before.   This same year Romero would release his most gruesome film, “Day of the Dead”.  Early on in production, the producers and director wanted to make a film that was sort of a homage to the 1969 classic Night of the Living Dead.  It is a tribute to that old Drive -In Horror movie era.

Now the first time I saw this film was when I was about twelve years ago and my cousin had a copy on VHS.  We sat down and watched it, and my jaw dropped on how crazy this movie was.  We had to turn off the movie ever so often when his parents would come in the room so that they wouldn’t see us watching blood and guts and tits.  All necessary things to have in a horror movie by the way.

Merely chalking Return of the Living Dead as a horror comedy really doesn’t do this justice.  This really is the ultimate 80’s horror film from my youth.  It has some genuinely freaky moments, some over the top gore and a ghoulish sense of humor.  If you’re not laughing at a naked, frozen cadaver sprinting towards a screeching homeless guy or one of the characters discovering that movies lie about how to kill zombies, then surely you’ll chuckle at reanimated corpses chanting “brains” or roll your eyes when another character gives his short soliloquy about his look being a lifestyle.  I mean this movie has it all.  This a must own for anytime of the year.

Back in 2007, a big Collector’s edition of this movie was released and the director worked on remastering it.  This seems to be the same transfer on bluray which is a good thing.  It looks clear with the same feel as an 80’s movie.  It is presented in 1080p in 1.85:1.  Facial close-ups are great and the contrast is bright that gives the visibility of objects in the background some depth and clarity.  Some of the black levels are not consistent with the rest of the film but it is barely noticeable.  It is a great release but it would have been nice for a new HD transfer.

This release comes with a DTS-HS audio track which is the best out of all previous releases.  But since it was recorded in mono, do not expect something 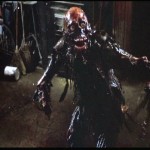 AMAZING.   It doesn’t pack a punch that would scare you out of your seat like newer recorded movies would do, but for mono quality, it does the trick.  It brings you back to that nostalgic 80’s era.

This is where my MAJOR gripe comes in.  The cover art for this release is NOT the awesome art that we are all used to.  Instead we get the decayed text in red with a one zombie jumping out at you towards the bottom of the cover.  What was wrong with the zombie punks in the graveyard?  That is an iconic image.  Why didn’t you keep that?  It is overall a very unattractive cover.  They should have kept it original.  The discs main menu is pretty cool though.  It zooms through the graveyard where their are full motion clips on all the tombstones with some instrumental music playing.

If you own previous editions, then all of those features were transfered to this release.  This is a good thing, because the extras are heavy plenty of them.

Overall, I think this is a solid release, but I do not think it will be the last one.  I do like the fact that you get the DVD and Bluray with this purchase.  The audio is the best you will have so far with this release and the picture is solid.  This is truly a gem of a film and a must own for any horror fans.

Make the purchase by clicking the link/picture below in time for Halloween.