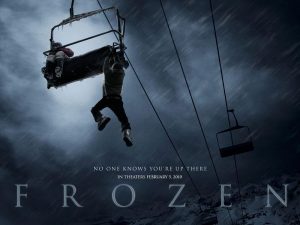 Adam Green is one talented young filmmaker.  He caught my eye with his 1st film, “Hatchet”.  Then I kept hearing about this movie called “Frozen”.  I did not initially know what it was about, then I heard through some sources that it was about three college kids who get stuck high up on a ski lift.

After hearing this, I thought, that’s not that bad, they could survive a night.  How could you make an interesting movie about that?

Well Adam Green did and he made one hell of a fun and tense movie.

It begs the question, what would you do in a terrible situation to stay alive?

So I’m going to flat out say it…these three main characters are in Frozen are STUPID.  It is their own fault they are stuck up there and the decisions they make are ridiculous, but without these stupid decisions, we would not have a FUN film.  So keep that in mind while watching the film.  And you know that there are a lot of dumb people in this world that will do the insanely stupid shit these kids do.  That said, I find this film fairly realistic and a hell of a lot of fun.

This is one of those films that is so full of suspense that you might actually sweat and that whoever you watch it with will spend the entire time during the movie and after telling you what they would have done in that situation.

I personally think that this would be cool as hell as a stage play.  Like a one setting type of scenario of survival.  Would be AWESOME.

This is a film to watch with a big audience.  So get your friends over and pop this into your player and take joy in all the screams and people gripping each other, because it WILL happen.

The movie is scary, vicious, tense, and so much fun to watch with people to see them EEEK and claw at you in horror.

Pick this up below.