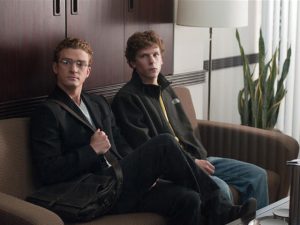 The #1 movie in the country is getting rave reviews from all over the board.  With  a team like David Fincher (Fight Club) and Aaron Sorkin (West Wing) making this Facebook movie, you would definitely click the “Like” button.  Hope you enjoy Cowdefender’s review of The Social Network.

A compelling walk and talk with brilliant portrayals of some incredibly bright individuals. Sorkin dialog at its most tight. This movie packs 3+ hours of snappy dialog into its 2ish hour runtime. A complaint I often find with movies based on real people is that I wind up not liking anyone. That wasn’t the case here. I liked or felt sympathetic with most of the main characters.

The movie bends over backwards (in ways you won’t notice) to reinforce authenticity. In one scene Zuckerberg leaves a computer science class, the professor jokes that he must’ve found himself in over his head at which time Zuckerberg answers the exceptionally difficult question on his way out. What you don’t see is that as it was originally shot his technobabble was incorrect. It was later reshot with corrections later. Detail.

The only things that could resemble gripes about this movie are:

As far as point 1: we know how the story ends. It’s the opposite of a tragedy. We don’t know all the details, but we have a good idea that the lawsuits won’t kill the Facebook. For point 2: the movie is a very interesting slice of the lives of some interesting people. It has a sensible beginning and end, but it doesn’t get to have some kind of grand closure. That is to say, it doesn’t really have the chance to stick the landing. But that is a very small gripe. I don’t know that they could have executed this movie any better than they did.