Shrek Gets The Bluray Treatment 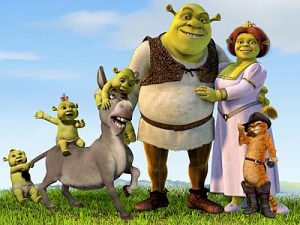 All four Shrek films will arrive on Blu-Ray on the same day this year and just in time for the holidays.  The plans are to release the three previous Shrek films on the same day the 4th installment, “Shrek Forever After” on December 7th.  Shrek: The Whole Story Box Set will be available on Bluray and DVD.  Most, if not all of the previous extras on the DVD versions will be carried over to the blu-ray, plus some new ones including an all-new short called  “Donkey’s Christmas Shrektacular”.   In addition to the box set the 4th installment, “Shrek Forever After” will be available by itself in a combo pack including the blu-ray & dvd.

No word yet on if the previous films will be released by themselves.

I hope they are.  It makes me “HULK” mad when studios do this kind of thing.  If you have a trilogy or tv show, and you haven’t released the films on blu-ray yet, and the final film or show in your franchise is getting the blu-ray treatment, and the only way to get the previous entertainment on bluray is in  a box set, then you are going to lose sales and piss people off.

For instance, this Shrek franchise.  The first two films were great.  I would gladly shell out some money for those two in HD.  But, not for the third one.  The 3rd film was phoned in and half-assed and I do NOT want any part of it.  So the only way I can get my previous Shrek films is by purchasing the entire collection, then FUCK YOU studios.

You already did it with the Spider-Man trilogy.  I have not met a single soul that has enjoyed the third Spidey film.  But the only way I can get a copy of the first two films (which are EXCELLENT) is for me to purchase all three films in the set.  You also did it with the Fraggle Rock tv series by releasing the last season only in a box box set of all seasons.  You also did that with the Lord of the Rings trilogy bluray.  You only released them in a set.

Now I know you always eventually release them individually, but the Spider-Man series has been out for a few years and on ly now is it finally being released individually.

So please studios, release the Shrek films individually in addition to the box set.