STAR WARS Coming to a theater near You in 3-D 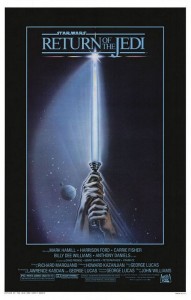 Will we get to see Han shoot first in this edition?  Will the Ewok song be at the end of Jedi?

My guess is NO.  Because George Lucas hates STAR WARS and its fans.

But we will be getting STAR WARS films in the theater again.  This time it will be in 3-D.

It is not all good news of course.

DAMN. Old I will be.

Supposedly the reason for the films being spaced out so far is that it takes that long to transfer the films into 3-D.

My opinion, is that they will milk it with dvd/bluray releases and new toys each year to make as much money as they can.