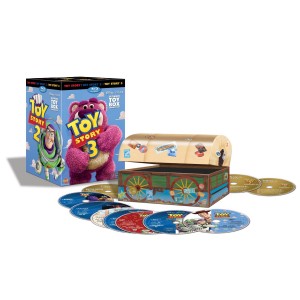 Disney has issued their Toy Story 3 press release, which confirms that the film will bow in multiple versions.

To this, the Blu-ray will add a Cine-Explore commentary/viewing mode (with director Lee Unkrich and producer Darla K. Anderson), a Beyond the Toybox alternate commentary track (with story supervisor Jason Katz, supervising technical director Guido Quaroni, production designer Bob Pauley and supervising animators Bobby Podesta and Michael Venturini), the Toy Story Trivia Dash game and 7 more featurettes (Beginnings: Setting a Story in Motion, Bonnie’s Playtime: A Story Roundtable, Roundin’ Up a Western Opening, Life of a Shot, Goodbye Andy, Accidental Toymakers and The Making of Day & Night). Audio on the Blu-ray will be 7.1 DTS-HD Master Audio.

I am looking forward to this set. Love all these films.

You can pre order the box trilogy below for 35% off which brings all three blurays and extras to $65.99.