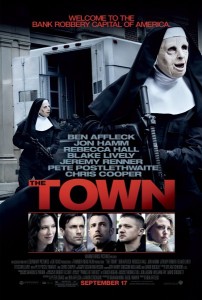 Say what you will about Ben Affleck. I like the guy.  His previous film, “Gone Baby Gone” was actually really great as it was his first film he directed.  “The Town” is his second.  I look forward to more films out of Ben Affleck.  Perhaps a sequel to Phantoms??  I kid.  Here is a short review of” The Town” from Cowdefender.

Affleck’s newest film is bound to remove some of the hate for him him out there. As undeserved and overblown as I find that hate for the man, it exists and I don’t know how people can cling to it having seen this. The direction was very good, very polished. The pacing was excellent. For a movie like this, if it isn’t done right the movie sucks when people aren’t shooting. If it’s done really really poorly it’ll suck while they’re shooting, too. At no point does this flick suck. There’s tension in almost every scene due to what is established in the previews. Affleck was one of the guys that held the girl hostage and then he seems to pursue her romantically. In all of their interactions you wonder if he’ll do or say something that can screw things up, or if she’ll say something about the heist that he’ll find troubling, etc etc. Affleck’s character is complicated, too. Human. He’s selfish at times and (non plot spoiler alert) at one point he takes a crying baby out of the room of a motel and places it in the hallway.

The action sequences are excellent, well conceived, well executed, perfect audio, clever. It’s going to get compared to other movies because a crew is using assault rifles to rob people and they’re organized, but it feels like it’s own thing. A very fun ride.