Cowdefender gets an “Easy A” (Review) 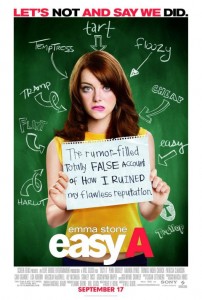 It seems that Cowdefender really was smitten with “Easy A”  By his review, I hope that more teen centric movies are like this.  I am anxious to see what other films come of this.

“By acknowledging films of the past a film, at times, can feel fresh. Easy A at times tips its hat to films of the past, it doesn’t pretend that the Hughes films didn’t exist and steal from them. It couldn’t in good faith steal from Hughes, because they’re mentioned. So as the film gets going my first thought was that it was sharp and clever, but not hilarious. It does get funnier as it went, but never is consistently hilarious. With that said it was a far better film than I could’ve expected.

Emma Stone is hot, we knew that and she’s been consistently pandering to nerds and geeks. Hooking up with the fat guy in Superbad (Jonah Hill) and an introverted loser turned zombie survivor (Jesse Eisenberg). Now she moves on to the guys that are bullied and alienated in high school, all of them. Her characters are probably engineered to draw in guys just like me and it works. She’s incredibly charming and has incredible eyes that are worth seeing on a huge screen or in HD later if you need to wait for some reason to see this.

There are some good laughs, the best generally come from Tucci and Clarkson who play Stone’s parents. I don’t want to take away any of the moments they provide, I’ll just say that they were very different from most movie parents I’ve seen. The last bit that makes this film a must see (for those looking for light hearted, fairly funny fair) is that the Olive character is fully dimensionalized. She’s believable, real and so well thought out that start to being able to see things how she sees things and she’s someone worth experiencing that with.”

One thought on “Cowdefender gets an “Easy A” (Review)”