Bryan Takes A Walk Through the Boardwalk Empire (Review) 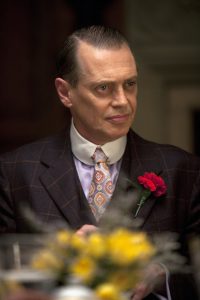 HBO’s new prohibition gangster era series might be the best series to come out of the channel.  HBO already gave us an amazing gangster show at one point with The Sopranos.  But Boardwalk Empire takes the cake.

On the subject of The Sopranos, former writer/ producer of The Sopranos, Terrence Winter is the mastermind behind the new Boardwalk Empire series.  Add to that a former Sopranos victim, Steve Buschemi who plays the lead character, “Nucky Thompson” and you already have a start to a great show.

Martin Scorsese lends his talent to direct the first episode of the series which is nothing short of perfection.  Scorsese really has knack for making gangster films.  I believe this his first direction of something on tv that is fiction since the 1980’s.

It really seems HBO put tons of money into this show.  All the CGI and costumes to make the 1920’s look like the actual 1920’s is spectacular.  You can tall a whole lot of love and time went into making this show right and real.

In the first episode you will see the start of Al Capone, a midget boxing match, a silent film of Fatty Arbuckle, quite a bit of gore and uber extreme violence, and much much more.

Omar from “The Wire” makes a small appearance in the first episode.  I have a feeling that in episodes to come he will be a key character to Nucky.

Already this show has entranced me and I cannot wait until next Sunday.

I think the only other show that will be this good or better this year will be “The Walking Dead” on AMC.

What did you think of the first episode?