Boardwalk Empire Has Been Renewed for a 2nd Season 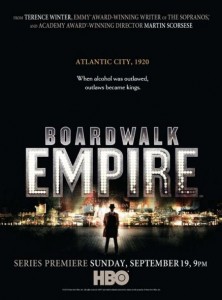 I knew this show would be a hit.  It was so well done.  Read my review of the first episode HERE.

HBO has ordered a 2nd season of Boardwalk Empire already.  No word on a premiere date or number of episodes, but it is in stone.  Also the premiere of the 1st episode this past Sunday had just under 5 million viewers which was HBO’s largest premiere in six years.  Well Done HBO.  Below is the press release.  ENJOY!

“All the ingredients aligned for this one, from Mark Wahlberg and Steve Levinson’s initial pitch, to Martin Scorsese’s enormous contributions as director and executive producer, to the genius of Terry Winter and the expertise of Tim Van Patten, to a stellar cast led by Steve Buscemi,” said Lombardo. “The response from the media and our viewers has been nothing short of amazing.”

From Terence Winter, Emmy® Award-winning writer of “The Sopranos” and Academy Award®-winning director Martin Scorsese, BOARDWALK EMPIRE is set in Atlantic City at the dawn of Prohibition, when the sale of alcohol became illegal throughout the United States.