Bruce Campbell to Make Sequel to My Name is Bruce 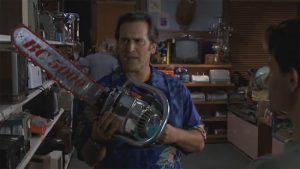 Bruce “Man-God” Campbell told Hero Complex that there will be a sequel to “My Name is Bruce” called “Bruce vs. Frankenstein”.  This comes as kind of a shock to me since he turned down the sequel to “Bubba Ho-Tep”.

Here is what Bruce had to say: “Yeah, [it’s] “The Expendables,” or more like the “It’s a Mad Mad Mad Mad World” of horror. I want to get so many horror movie stars that people can’t possibly not see the movie. I want to give them other stuff to do. I want to have Kane Hodder be very particular about what he eats. I want Robert Englund to be a tough guy, like he knows tae kwon do or something. I want to find out the hidden sides of all these people. Some will play themselves, some will play alternate characters as well. I may approach Kane Hodder to play Frankenstein. He could be Kane Hodder himself fighting himself as Frankenstein. It could be crazy. It’s a silly concocted story that we hope to do maybe in a year or so. My breaks between “Burn Notice” have been getting tighter because they’ve been adding episodes. They’re trying to trap me like a rat in the TV world, and I might just let them. There’s a script, it just kind of blows right now, so no one’s really seeing it. We gotta work on it. Definitely shoot in Oregon all on a stage. It’s like the “300? of horror comedies. We want to make it a whole world. Someone’s gotta take Frank down for good.”

This sounds like it will be the BEST horror comedy film since “The Lost Boys”.  Hopefully they can get an excellent working script.

Check out the “My Name is Bruce” DVD for some good laughs.