“Too Late has something important to say, but it also is highly entertaining and is a remarkable mix of horror and comedy.”

It’s mostly a fine line when someone walks the tightrope of horror and comedy. Mixing those ingredients could be tough, but over the decades, a few films have become legendary in that excellent genre of horror-comedy. Films like The Lost Boys and Shaun Of The Dead, and even Gremlins are prime examples. Now, D.W. Thomas’ most triumphant horror-comedy Too Late can be added to that chef’s dinner menu. Too Late checks all the boxes of laughter, thrills, horror, gore, and even has a poignant message behind its entrails and jokes about the Los Angeles independent stand-up comedy scene.

Too Late follows Violet Fields (the impressive Alyssa Limperis), an aspiring comedian, however, most of her time is spent as the right-hand-woman and assistant to Bob Devore (Ron Lynch from Home Movies and Bob’s Burgers), an older, famous veteran stand up comic who runs his own stand-up and variety show – host to many young comedians. Not only is Devore a maniacal monster as his personality is brash, mean-spirited, rude, abusive, and forces Violet to go above and beyond the call of duty every second of the day, he’s also a literal monster – one with fangs who sleeps in a coffin and could be called a demonic vampire who preys on young comics who Violet sets up for him.

There are quite a few similarities to the dynamic in Little Shop Of Horrors here, but instead of a man-eating plant who sings some toe-tapping songs, it’s a stand-up vampire comic with loads of jokes. Devore’s monster secret is safe with Violet, but it won’t be for long after she meets and falls for Jimmy Rhodes (Will Weldon), who becomes the number one interest of Devore. Through a web of abuse, jealousy, and blood in the stand-up comic world, Violet must make a survival decision on if she’s ready to kill the monster or be trapped as his assistant until his hunger takes over once again. 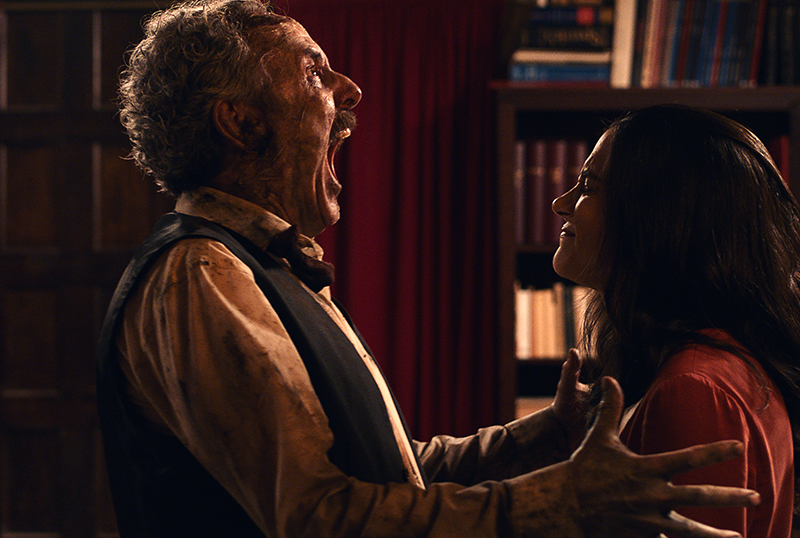 Director D.W. Thomas and writer Tom Becker perfectly navigate the indie stand-up comic scene with some hilarious stand-up material, but they also explore the seedy underbelly behind the curtain and all the drugs, alcohol, and abuse of many forms that happens to comics – mainly female comics on a routine basis. It’s not entirely a happy and funny scene behind closed doors as the film shows in some gruesome and wildly funny metaphors. The script is tight, smart, witty, and even makes room for some Evil Dead II style practical effects, full of blood and guts.

Limperis shines throughout the entire film, but her co-stars including the amazingly funny and beautiful Jenny Zigrino, playing Violet’s comic friend is just on fire throughout the entire movie. Everything she says and does is a blast. Rob Lynch is fantastic and looked like he had a hell of a time in costume, and of course, the cameos from Fred Armisen and Mary Lynn Rajskub are wonderful, who both conjure up some big laughs. D.W. Thomas’s eye behind the camera perfectly captures the essence of horror throughout as well. Too Late has something important to say, but it also is highly entertaining and is a remarkable mix of horror and comedy. 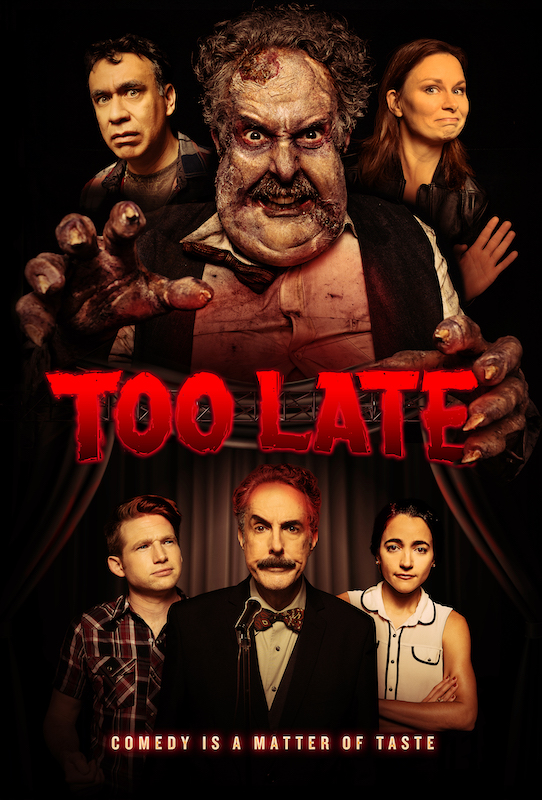