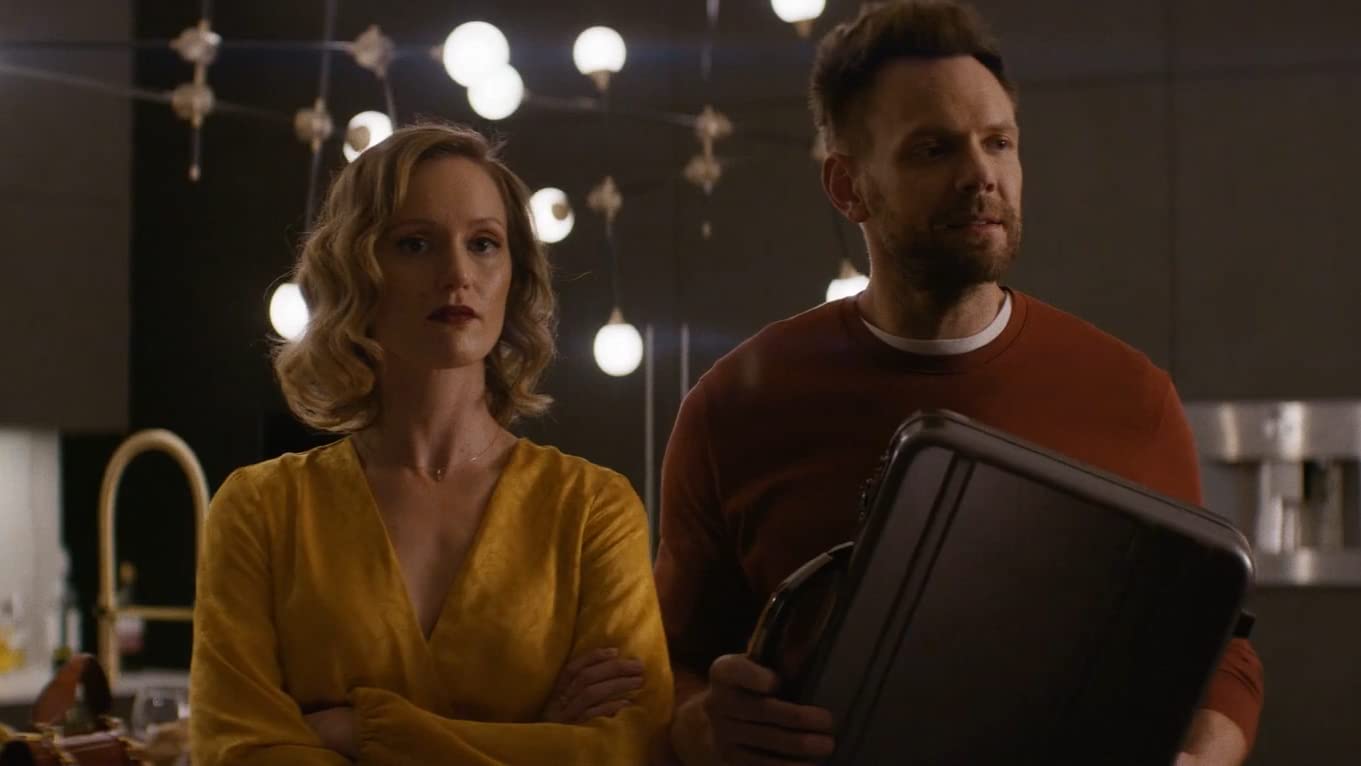 “Happily is a one-stop-shop of high-energy entertainment.”

Romantic comedies are a dime a dozen, but BenDavid Grabinski’s new film Happily takes that ever so stale genre and turns it into a thrilling, darkly funny, and spooky little film that has elements of The Twilight Zone. This all-star cast, along with a super-tight screenplay about a group of friends who decided to vacation in a luxurious house together get far more than what they bargained for that results in the best and worst aspects of their relationships coming to the forefront, is wildly entertaining, throws some curveballs, and allows for a decent message by the end of the day, complete with a great soundtrack. Happily is a rare gem in the romantic comedy genre.

The film follows closely the Happily married couple of Tom (Joel McHale) and Janet (Kerry Bishé), who play that one couple who seem to still be in their honeymoon phase many years after their marriage. They are constantly showcasing major public displays of affection and even hook up in the bathrooms at their friend’s dinner parties on the regular. It’s one of those lovey-dovey types of relationships 100% of the time, which drives some of their friends insane, including Val (Paul Scheer) and Karen (Natalie Zea), who call them out and neglect to invite them to their vacation with the rest of their friend’s group.

After some discussion, Tom and Janet are invited, but they are visited by a man named Mr. Goodman (Stephen Root), who they think was set up by their friends as some sort of doctor/psychologist to help them be a more “normal” couple. That’s when Mr. Goodman tells them he is not leaving their place until they inject this strange serum into their bodies, which leads to Tom and Janet killing this strange person. Keeping it all a secret, the duo head to the vacation with their friends, and strange things start to happen where rooms are revealed to have weapons, familiar voices are heard on the house intercom, and the ability to leave the complex has been taken away, forcing each individual to confront their own demons and relationships. 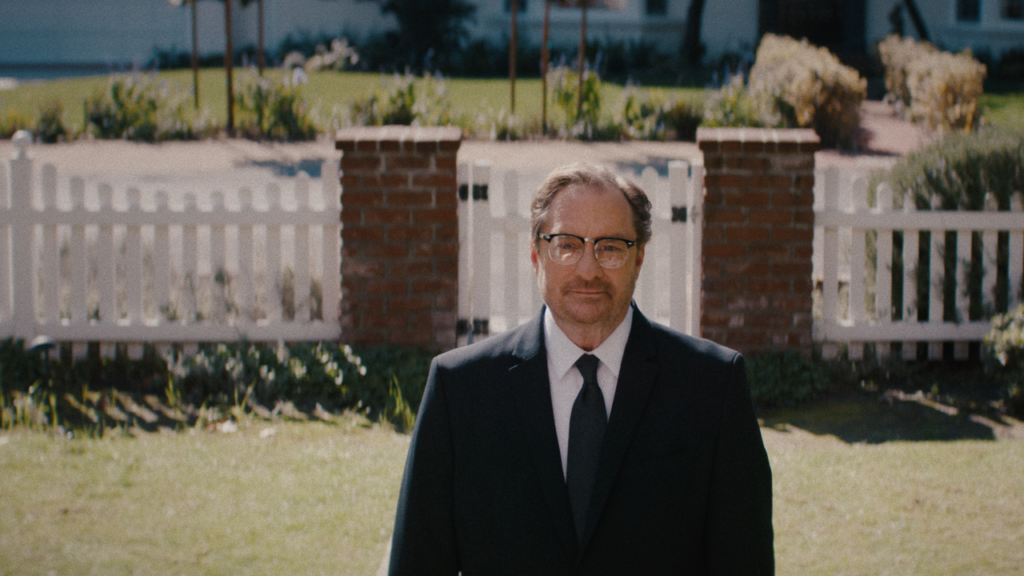 Grabinski slowly reveals the dirty skeletons in everyone’s closet in a natural and organic way, while keeping things darkly comical. From the jealousy of each friend towards Tom and Janet’s glorious relationship to the emotional and physical abuse in everyone else’s marriage and partnership. All is revealed and everyone will deal with it all in a different way. The supernatural and horror element is perfectly done and is as subtle as it gets, never overstepping its bounds here, but rather sticking to its core romantic-comedy genre with some brilliant flashes of genre-fare creeping in ever so often. It’s wonderful storytelling with some fantastic performances by everyone involved, including the above-mentioned cast, along with Natalie Morales, Job Daly, Charlyne Yi, and Breckin Meyer.

With Grabinski’s song choices that are familiar to the ’80s and ’90s film buffs with excellent additional music composed by the great Joe Trapanese, this film is a one-stop-shop of high-energy entertainment. It’s always wonderful to see a new take and fresh ideas out in film, specifically in the romantic-comedy realm, which Happily nails. Grabinski has some amazing ideas and a great penchant for writing nuanced and fun screenplays, along with a great eye behind the camera to tell a compelling and cohesive story while featuring the best of his actors. Happily is not to be missed. 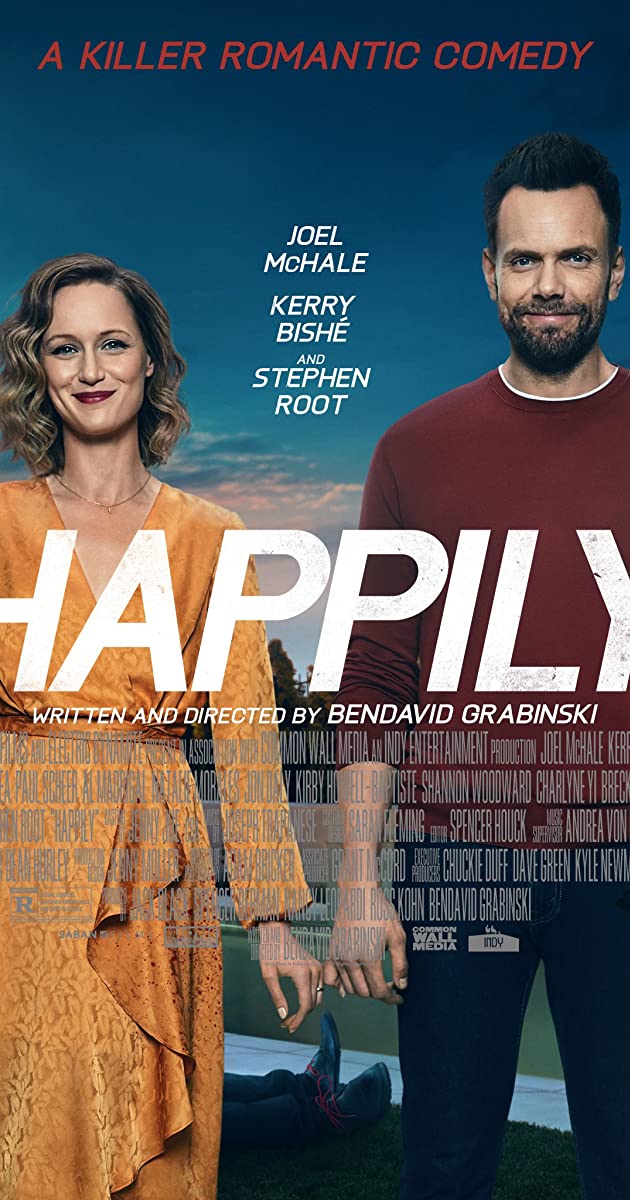