“Nocturne is mild fun with a paranormal notebook twist that never really gets explained.”

Nocturne is Blumhouse Television’s Black Swan stand-in. Nocturne follows the tale of twin sisters who both get into a music academy and their competitive spirit which boils over into psychological horror. A recent suicide at the school puts everyone understandably on edge as twins Juliet and Vivian return to get ready for a big recital. Vivian is the more outgoing and prettier (based on the wardrobe and makeup department) so she is obviously more successful and her sister Juliet is timid and a little jealous of her. Juliet finds the notebook for the girl who killed herself and it has some music in it and weird drawings. After receiving this notebook, Juliet starts to act a little strange and harsh towards Vivian. During an audition, Juliet chooses to play the same song as her sister causing some serious friction between the two which culminates when Vivian gets the solo. Juliet and she get into an argument at a party and Juliet leads Vivian to fall and break her arm which thrusts Juliet into the spotlight. 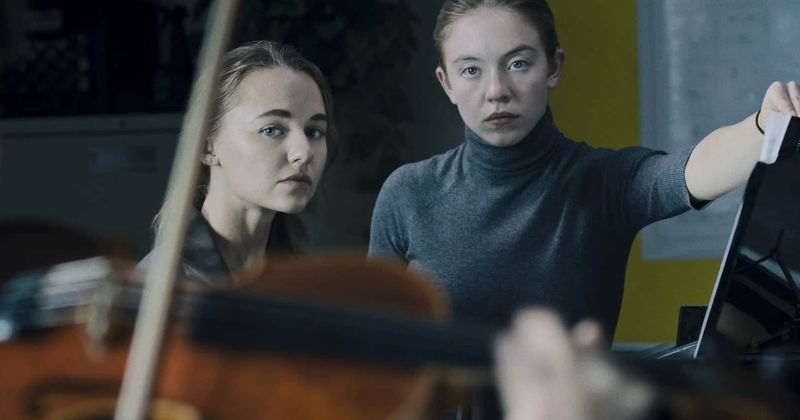 Once Juliet has this position for the solo she starts to act more aggressively as she progresses through the notebook. She argues with teachers, threatens teachers, attempts to seduce one too. Juliet doesn’t seem to understand why she is doing this but also enjoys it. The movie starts to rapidly move towards a climax which involves Juliet getting to the end of the notebook and maybe discovering why the previous owner of it killed herself.

Nocturne is mild fun with a paranormal notebook twist that in my opinion never really gets explained. I understand this (much like Black Swan) is all about the sacrifice for art and the destruction people cause themselves and others to achieve what they think is great but it isn’t as fully realized or effective as Black Swan. The two main performances are exactly what you would expect from this sort of fare but neither rises above a basic caricature of a competitive college-aged girl on any CW program. This movie also suffers from the same issue as many before it. It could have been a 45-minute episode instead of a 90-minute movie.

Ultimately these Blumhouse Television offerings aren’t as fun as any of us would have hoped. I truly think all of these movies are a substantial level below what they typically offer in theaters. However, if Blumhouse Television is going to be the minor leagues for their studios then that might be for the best. If new writers and directors get to earn their experience here and move on to bigger and better things then this will totally be worth it. I am always for new voices getting a shot at making movies and I hope this new banner allows for us to meet some new talented people. Maybe my expectations were a little too high going into these four movies but that is just a compliment to the standards that I have for Blumhouse. I look forward to whatever they put out next.