Will Ferrell and Rachel McAdams join some of their frequent collaborators and friends for a new musical romantic comedy called Eurovision Song Contest: The Story Of Fire Saga, debuting exclusively on Netflix. Ferrell is in rare form as he catapults himself into his oddball Icelandic character where McAdams holds her own as a magnificent screen presence of talent, comedy, and beauty as the two sing outlandish tunes in front of the world while struggling to catch that romantic hook with one another. It’s a bit too long at two hours, but there is enough charm, wit, and enough Ferrell physical comedy that results in a sweet movie for Netflix.

Eurovision Song Contest is a real-life competition televised worldwide that is the Wrestlemania and Superbowl of music and musicians. It’s as if American Idol was a sport in the Olympics where at least 50 different countries from around the globe send their best musicians to compete in a tournament of original songs where one winner takes the gold, voted on by both judges and the audience. This competition started in 1956 and has run each year until 2020, which was canceled due to the pandemic, however, Netflix has brought the contest to satirical form for those looking for a glimpse at the competition. The iconic music group ABBA was launched to international superstardom when they won the Eurovision Song Contest in 1974 with their song “Waterloo” and Celine Dion won the contest in 1988 – clearly not amateur hour.

Back in 2018, Ferrell attended the Eurovision Song Contest for research on this movie, thus co-writing along with his SNL writing partner Andrew Steele the script with David Dobkin (Shanghai Knights, Wedding Crashers) sitting in the director’s chair. It’s a cavalcade of inside jokes on the song contest with the usual flare-ups of romantic entanglements between Ferrell and McAdams. 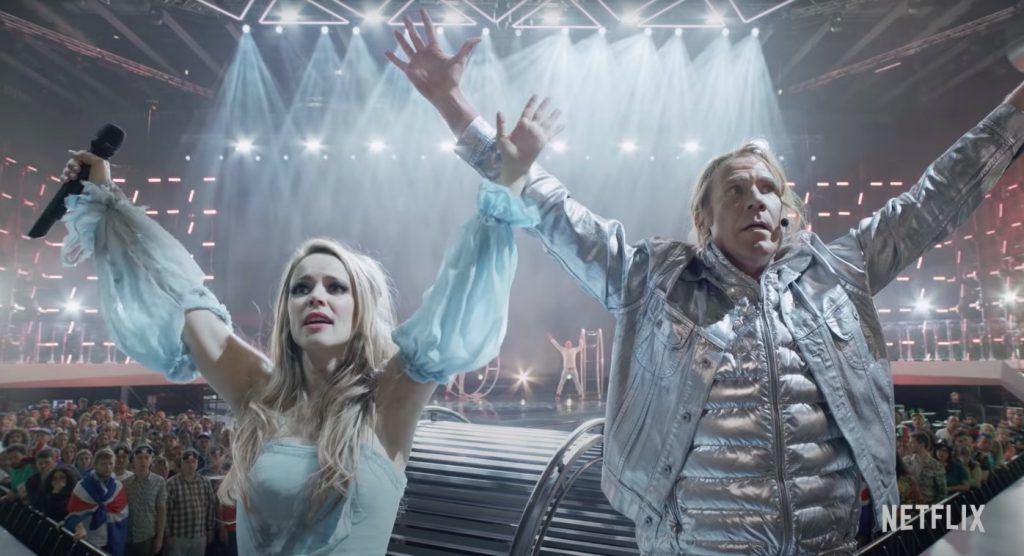 The film starts out in 1974 with a young Lars Erickssong (Will Ferrell’s character), who watches ABBA perform “Waterloo” on the Eurovision Song Contest with his family. This moment sparks his obsession with music and dream of winning the contest. Flash forward to present day where the older Lars and his romantic interest and running joke of whether she”s his sister – Sigrit Ericksdottir (McAdams) are performing their original song Volcano Man in their band called Fire Saga in what seems to be the perfect music video and song for residents of Winterfell in Game of Thrones. Their 80’s synth mixed with rock n roll along with their dazzling and over-the-top outfits really hits home for the music industry these days. Lars and Sigrit live in a small Icelandic fishing town where Lars stays with his dad Erick (Pierce Brosnan), who doesn’t approve of his son’s lifestyle and is in no way helpful in his dreams, a story arc that evolves over the course of the film.

Both Lars and Sigrit enter the Eurovision contest and begin to win the hearts of the judges, execs, and audience, despite their major flubs in each performance. Add in the romantic angle between the pop duo that goes through the usual obstacles in any romantic film, a half-baked murder plot, and a ton of silly comedy beats including Will Ferrell running inside a giant hamster wheel and a tight white onesie stuffed with objects to make his private parts look bigger, then Eurovision Song Contest: The Story of Fire Saga is ripe with laughs and musical accompaniments from Ferrell himself and many cameos from past winners and singers including Demi Levato and Dan Stevens as a Russian rock-opera singer who looks like George Michael. It’s a wacky circus inside an out.

The film itself goes on too long and could have benefited from a big edit into a crisp 85-minute film. Instead, a lot of the movie makes way for big music numbers on stage and a giant music medley with tons of cameos with the same sweeping camera shots that are evident in pop music videos. The scenes should garner some toe-tapping and dancing, but it all feels very fake, auto-tuned, and uninspired, although there are some funny moments with these sequences. At least Ferrell and Dobkin paid tribute to the unconventional wardrobe and massive stage theatrics that go with these performances on Eurovision, which is a sight to see, especially when Ferrell and McAdams are performing them.

The film is too long for its own good, however, there is something sugary and harmonious about the film and these two oddball characters who believe in little elves that live in the side of a mountain and who will never quit no matter how much the odds are stacked against them. Ferrell can add Lars Eickssong to his long list of characters like Ron Burgundy and Ricky Bobby here as Eurovision Song Contest: The Story of Fire Saga is just sweet enough. Here’s hoping for a reunion tour later on down the road in the form of some excellent new music videos.