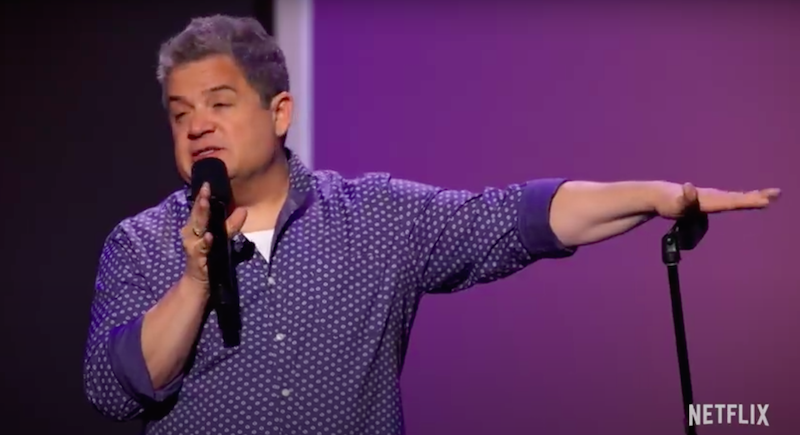 “I Love Everything is the perfect mixture of ingredients that has some uproarious laughs and some sweet tender messages to create a delicious buffet of comedy and heart.”

From Pixar to indie thrillers and all the way to geeking out on Star Wars, Ex Machina, and the Marvel Cinematic Universe – Patton Oswalt has permanently cemented himself in the annals of cinema, pop culture, and television over the past two decades. In addition to that, Oswalt’s bread and butter is stand up comedy, which allows his genius and play on words to cast its spell onto the masses like the Engorgio charm in Hogwarts. His new Netflix comedy special I Love Everything is the perfect mixture of ingredients that has some uproarious laughs and some sweet tender messages to create a delicious buffet of comedy and heart.

This special was filmed over two nights in Charlotte last year before the world went tits up and lost its collective mind and is a reminder of the finer and sensible things in life, like eating at Denny’s and growing older with people you love. Oswalt now in his 50s has some excellent advice and takes on what’s in store as the age increases in numbers and its spot on. From arguing with significant others over the most minor disagreements to what counts as exercise along with how a favorite pastime like eating a bowl of cereal became a strict form of punishment.

Oswalt elaborates with when he was younger, his cereal had sugar and words like Pow! and Pop! and Chocolate! in it. Now that he is 51, his cereal ran away and returned as dull, boring, brown and beige colored cereal known as Sorghum Farms Amaranth Flakes. Patton’s play on the English language as he tells this tale is nothing short of stellar and downright hilarious.

Other bits include raising his daughter, finding love again, which has a wonderful and sweet message behind it all that should be a universal motto – “When you see love, run to it.” It’s a statement that is profoundly true. Another remarkable observation is Patton’s look into the restaurant chain Denny’s and how self-aware and ironic they are in everything they produce from their kid’s menu to their food and ambiance. It’s a delight and grand slam of humor.

Also of note is Patton’s background set which rids itself of the usual and stale backdrop of brick walls and curtains, but is a nice, serene mid-century modern house that is lit up perfectly as Patton himself stands on a beautifully lit pool as he talks about life, family, and food. None of the anger is really here like from his first outings where he talked about the Star Wars prequels and the infamous KFC bowl. He’s calm, collected, and observes society’s peccadillos astonishingly well.

WATCH IT ON NETFLIX