Weeellllllllllllll…It’s The Big Show – Show! Netflix has become a tag team partner as of late with the giant pro-wrestling company WWE and has delivered on a brand new sitcom called The Big Show Show that stars The Big Show (Paul Wight II) from WWE, the famous and iconic wrestling superstar who was billed at a towering 7’1 tall man walking and weighing at 500 pounds. In the wrestling business, he was the next Andre the Giant. This Netflix sitcom pays homage to the early 1990s Nickelodeon and Primetime network shows that kids of the 70s and 80s grew up with.

Times have changed a lot since those early 1990s where a sitcom family would solve their problems within the span of 30 minutes while causing some silly hijinks and lovable one-liners along the way. Nowadays, audiences push for teachers who turn into meth dealers, dragon flying princesses, and perhaps a sadistic family that owns a pub in Philadelphia. The formula of a simple setup and punchline joke has been put on the backburner for a long time now, and if these long lost series still take place, they fancy themselves with sex, drugs and rock n roll. That’s not the case with The Big Show Show, which confides in its warm, fuzzy nature, never pushing the bounds, but rather sticks to its kid and family-friendly roots – and it succeeds on all those levels, especially in these strange locked-in times. 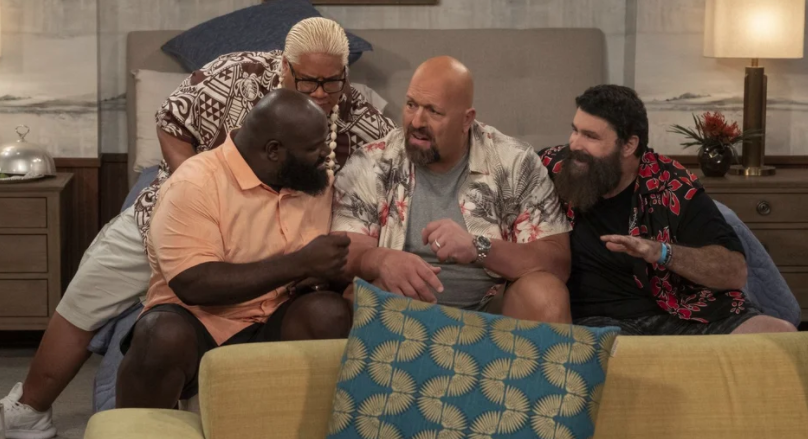 Season one focuses on The Big Show, played by a not too far off version of his real-life self, as he tries to settle in with his retirement from the wrestling ring with his family in Florida. His oldest teenage daughter from a previous marriage Lola (Reylynn Caster) moves in with Big Show and his family and struggles to adjust to her new life. Meanwhile, the middle daughter Mandy (Lily Brooks O’Briant), an overdramatic young lady who is an over-achiever never sees eye to eye with the youngest grade school sibling J.J. (Juliet Donenfeld), the family criminal who would best fit in with the Gallagher family in Showtime’s Shameless. Rounding out the family is Cassy (Allison Munn), wife to Big Show and mother to three girls and perhaps the level-head of the household when she’s not getting into her own hot mess of things.

Each episode is different and shows very little continuity, but in this first season, Big Show is figuring out what to do with his life now that he’s not choke-slamming opponents in the squared circle. He tries his hand at a variety of new careers which don’t pan out too well such as a real estate agent, or a chef on live tv. On top of that, the stay-at-home Big Show tries to wrangle his three daughters the best he can as they usually teach each other something new and poignant about life. Everything is filled with cheesy punchlines, wrestling jokes, and a bit of fun physical comedy from the Big Show, such as when his oldest daughter has a date and Big Show wears his championship belt to intimidate him. 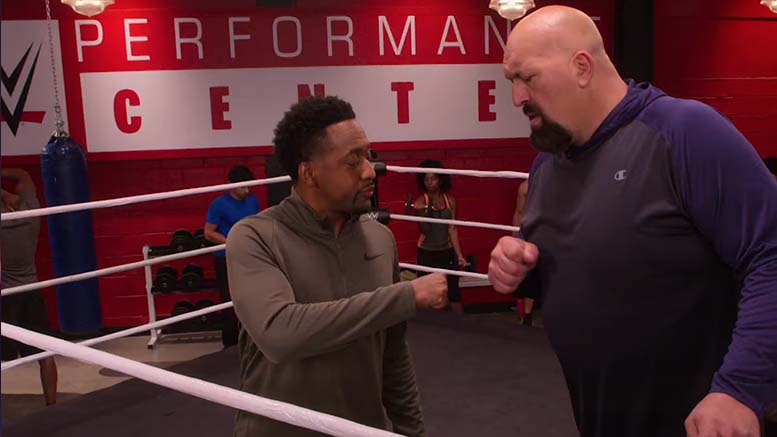 There are a few wrestling superstars that show up throughout as well as a co-starring best friend of Big Show – Jaleel White, playing a guy named Terrence Malick or Terry for short, which is perfect on every level. Of course, Jaleel White is best known for playing Urkel on Family Matters. To top that, Melissa Joan Hart serves as the director for at least one oft he episodes in season one, which brings the full circle of sitcom life to the spotlight here, because this series feels like it belongs right next to their respective 1990’s hit television programs.

Paul Wight II is perfectly capable of carrying a sitcom like this. He’s charming, funny, and always steals the show with his bumbling physical comedy and energetic delivery. The rest of the cast is in on the joke too and play the part well that evokes that nostalgic sense of those shows that were so popular some 30 years ago. The Big Show Show plays it safe completely, never straying into risky or PG-13 territory. It sticks to its very family-friendly world, which is perfectly alright for this point in time. Not only that, but it feels right and wonderful to have a show that focuses on family happiness and love rather than zombies, betrayal, and drug lords for once. The Big Show Show has just become champion and let’s hope it’s a multi-year reign on Netflix.