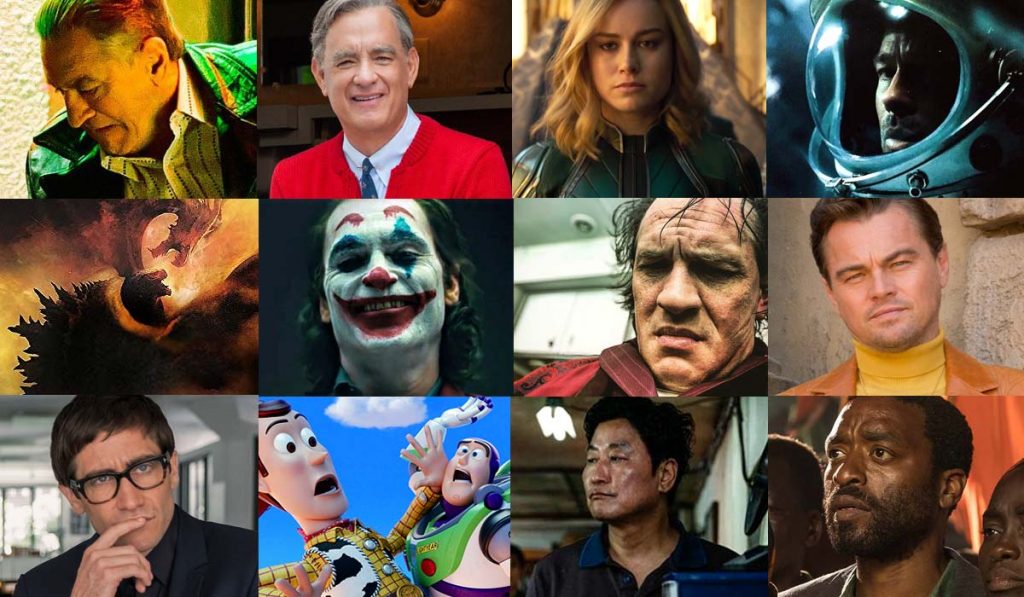 Happy New Year, everyone. It’s gonna be a super-sweet 2020 full of thrilling, funny, horrific, and romantic movies and I’m not talking about 2019’s CATS either. As far as this past year though, I would like to take you on a journey below and give you some of my most favorite moments from 2019’s cinema slate and of course some of my most favorite, cherry-picked films of the year. It’s gonna be a wild ride too with some unexpected choices below. Enjoy and let me know what you think.

Bryan’s Most Favorite Films of 2019 in no Particular Order:

Ari Aster gave me the Pedigree with Hereditary (I loved it), then gave me the sweet chin music and took me on a trip to Sweden to be a part of his most desirable vacation with Midsommar. Later on in the year, I got to witness his director’s cut, which is not the usual bullshit of 1-3 minutes longer, but rather a whopping 30 minutes of extra, important storytelling that made the film even better. Damn this movie is good on multiple viewings and all parts of me wants to swallow the juice, take the breath, and be an integral part of this community and movie. Perfect all around.

Yes, I can like sweet, heart-warming films too. I’m not a perverted deviant 100% of the time (I am.) This movie spoke to me. I had a smile, tears of happiness, and sparkles in my eyes for every second of this film. It has adventure, Bruce Dern, Mankind referring, Jake the Snake smoking a cigarette, and a ton of pro-wrestling with an unlikely duo at the center. As soon as I heard of this movie, I knew I would love it and it did NOT disappoint like Triple H v Hulk Hogan at Backlash 2002. No, this movie is more like Daniel Bryan winning both matches at Wrestlemania 30 with its underdog story and family values at its core. There’s not a heavenlier film than this in 2019.

If I were to tell you 15 years ago that Adam Sandler deserved all the acting awards, you would put me in the cross-face chicken wing until I passed out then give me the F5 for good measure. And you’d be right to do so. But hey, in 2019, The Sand-man starred in this Safdie Bros. film and completely blew everyone out of the water. I’ve never seen Adam Sandler like this and thank you for putting on one of my favorite performances of your career and out of anyone really in 2019. Not only did you make me hate and root for you at the same time for the whole film, but you made me sweat, my heart-rate went up, and I got to see you naked in the trunk of a car right before Passover Seder all in one movie. Never in my wildest dreams would I think of getting something as amazing as this. But I did, and I fucking loved every nail-biting second of it. In fact, I’m starting a diamond store that specifically deals in Blu-ray/4K UHD diamond-encrusted casing.

CLIMAX – If you add drugs, rape, incest, and the most diabolical elements of Dante’s Inferno to the movie Step-Up, you will get the film Climax. Directed by the truly underrated French filmmaker Gaspar Noe, this beautiful and fucked-up film will leave you gasping for air and dancing at the same time. Please give me a Gaspar Noe movie once a year for the next 300 years and I’ll die happy. These dancers/actors are simply phenomenal and this dance routine at the beginning of the film proves it.

Best Shot of Someone Running of 2019

1917 – Step aside Tom Cruise, there’s a new runner in town and it takes place in the WWI film 1917, shot by Roger Deakins and directed by Sam Mendes. The entire movie is a milestone really in filmmaking as the simple story focuses on two soldiers trying to get a couple of miles down the countryside, avoiding enemies, in order to tell the other batallion an important message that could save thousands of lives. The gimmick here is that the whole film is made to look like it was one long continuous shot in real-time with no edits or cuts. Perfection really. There was one shot though where our friendly soldier climbs out of the muck and onto the battlefield alone and runs to his destination. It’s a magical experience and a grand scope on the big screen.

Most Shocking Movie Moment of 2019

Ready or Not – So you marry into a family where on your wedding day, you have to play a board game with your inlaws in some sort of supernatural deal with the devil that was made many years prior. This game might be the death of you too as it’s you vs the other family in a bloody game of hide and seek. This film is full of fantastic excitement, thrills, and dark comedy, along with some brutal death scenes that all seem to be tied to this notion that this family must pay the devil a debut by way of sacrifice. None of it makes sense until it is revealed at the end that it’s all goddamn real. I laughed out loud, I loved out loud, and I watched this movie many times out loud.

Best Use of Brad Caprio and Leo DiPitt in 2019

Once Upon a Time…In Hollywood – There were like 73 films that were released in 2019 that had something to do with Charles Manson. The best one, of course, was the one that was made by Quentin Tarantino and starred America’s favorite couple, Brad & Leo. Seeing Brad beat up Bruce Lee, feed his dog, fix a TV antenna, and bash someone’s face in 127 times into a brick fireplace is pure divinity. Not only that, Leo takes out fake nazis with a flame thrower, calls a car a mechanical asshole in a robe, and cries when an 8-year old tells him he’s the best actor she’s ever seen. It’s simply bliss when Tarantino makes a movie and this one mint.

Dolemite is My Name – Eddie Murphy is not only one of the funniest beings to have ever lived, but he’s also one impressive actor. Filmmaker Craig Brewer and Murphy paid homage to one of the cinematic greats Rudy Ray Moore AKA Dolemite with this new movie that is perhaps the most inspiring films of the year. I love films about making movies and music and this cinematic experience just puts a happy face on everyone who sees it. Full of fucking-funny jokes, excellent music, and a true-life tale that should be seen and heard by all families, Dolemite is My Name is a film that I will watch often for many years to come, not to mention listen to the soundtrack. But in this film, there is a sex scene between Eddie murphy and a female co-star that literally brings down the roof, shakes the lights and mirrors, and spews out smoke at its climax. Wesley Snipes said it best, “That’s fuckin’ funny!”

JoJo Rabbit – Three strikes. Three Amigos. Three Musketeers. Three-Headed Dragon. And Three perfect songs in a movie are all in the fantastic satire film Jojo Rabbit from the wonderfully gifted filmmaker/actor Taika Waititi. The film is something else. A 10-year kid who wants to join the youth nazi training program during WWII whose best friend is a cartoonish imaginary Adolf Hitler. You’ll laugh, you’ll cry, you’ll sing along to the music. The first song comes in the form of the German translated Beatles song “I Wanna Hold Your Hand”, which plays during a killer opening scene, depicting the popularity of Hitler, which was similar to how popular the Beatles were. The second song was a badass rendition of “I Don’t Want to Grow Up”, but the coolest man on planet Earth – Tom Waits, set to a montage of the youth nazi training. Lastly, a German version of David Bowie’s “Heroes”, which is the closing song of the film. Hot damn, what a good soundtrack and excellent uses of these songs. Not to mention one hell of a good movie.

Most Inception-like Movie of 2019

Avengers: Endgame – Say what you will, haters and Marty S. – Disney and Marvel took huge risks with their franchise and especially the final two films. Marvel killed off half of their characters for an entire year. That takes balls. In Endgame, the culmination of 10 years and 22 films came to a deeply impacting, emotional, and exciting climax when we heard the words “On your left.” Mixed with the perfect score and our favorite heroes returning to life to save the entire universe was truly something special. To finally hear those two words perfectly stated by Captain America was earned and felt right. I don’t usually audibly cheer or applaud in a movie. In fact, it’s pretty much never – even when Bruce Campbell appears. But in this moment – I did and it felt good.

Here’s to many more wonderful films and moments in 2020.