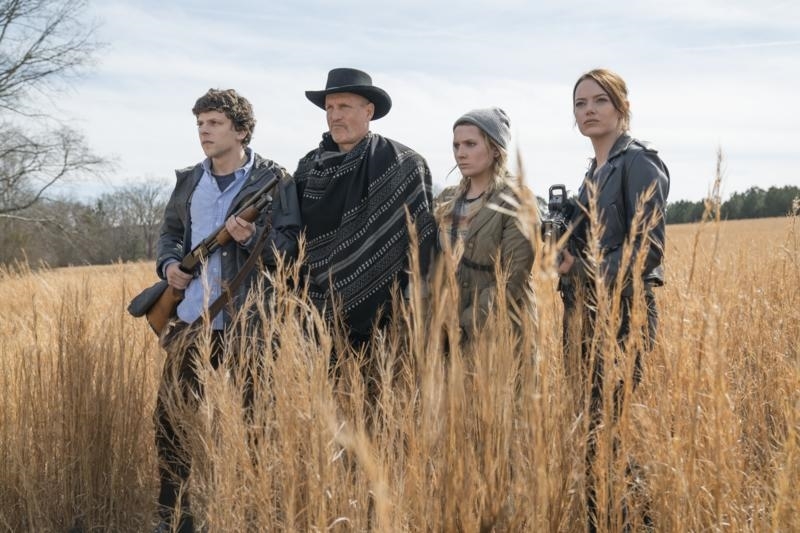 Let’s face it — we’re in a full-fledged era of sequels, reboots, and remakes. Why would studios invest in original material when they can continue the cash wave of nostalgia? It’s been a decade since the wickedly funny and critically successful ‘Zombieland’ (2009) hit theaters, and all of the survivors are back to work on their cardio in ‘Zombieland: Double Tap’, including director Ruben Fleischer. Some new characters and settings have been thrown in to revive the storyline, but regrettably, all roads lead to redundancy. ‘Double Tap’ is mostly enjoyable and operates with the same humor as the original, but this follow-up can’t quite match the fresh, gleeful nerdiness and thrilling escapades of the first.

Ruben sticks with the commanding sounds of Metallica for the opening title sequence, as we’re re-introduced to the team of gun-blazing originals: Abagail Breslin, Jesse Eisenberg, Woody Harrelson & Emma Stone. As guts fly and fires ignite in front of the White House, it’s one of the few glorious spectacles that ‘Zombieland: Double Tap’ has to offer. But despite the strong start, once it’s revealed that Little Rock (Breslin) has run off with an eccentric hippie named Berkeley (Avan Jogia) and the group’s sole mission is to rescue her, the film begins to stumble and fall flat on its face.

There are many creative opportunities that this sequel could have taken to make it feel necessary, but it gets trapped in a cycle and never evolves in any significant way. The new cast comes across as cartoonish, underdeveloped and genuinely unlikable. The secondhand jokes and references are lazy to those who have seen the forerunner, and there’s an unenthusiastic atmosphere that takes away from the fun. And speaking of references, if you’re going to recycle humor, why leave out one of the most comical parts of Tallahassee’s (Harrelson) character: his obsession with Twinkies? This seems like a major oversight with the writers, not to mention a noteworthy breakage of rule #32: Enjoy the little things.

Sure, ‘Zombieland: Double Tap’ delivers the usual splattery gore and action (even a bigger and better monster truck to crush the living dead) but the stale taste it leaves in your mouth once the end credits roll is unmistakable. New audiences being introduced to the franchise will likely have no complaints, but fans of the original will no doubt question whether this movie should even exist. ‘Double Tap’ in due course is just another example of why sometimes it’s better to leave cult successes alone and let sleeping zombies lie.