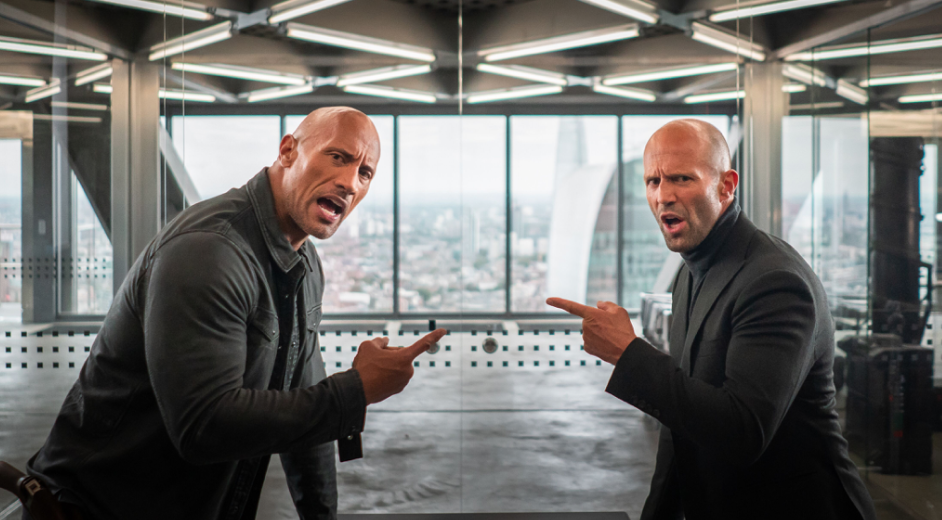 “‘Hobbs and Shaw’ is a fun movie that deserves to be seen loud and with friends.”

I was watching the original Fast and Furious movie the other day and realized that film is now considered a drama with a car chase and a couple of gun blasts. I wouldn’t regard it is a big action movie anymore, which is odd to say. Over the past decade or more, these Fast and Furious movies have grown into mega-budget action blockbusters that tend to lean over how they can top the previous action sequence along with a couple of funny lines of dialogue. Now don’t get me wrong, I enjoy these movies on an over-the-top level where I can appreciate the insane spectacle on screen. It’s a fun break from the more serious stories I see. Now we have the first spinoff movie from that franchise called ‘Hobbs and Shaw‘, that stars the characters Luke Hobbs (Dwayne ‘The Rock’ Johnson) and Deckard Shaw (Jason Statham) from the Fast and Furious franchise.

It’s a bloated 140-minute mega-budget action vehicle from Johnson that never strays from his previous twelve films in character or story. That’s not necessarily a bad thing either. Once upon a time, we had an actor named Arnold Schwarzenegger who has a mile-long resume with movies like this, where Arnold basically played the same character, where he fought the bad guys, saved the world, and got the girl. And we all loved them and continue to hold them in high esteem. In the film ‘The Rundown‘, Schwarzenegger literally walks past The Rock and says “Have fun”, which he’s been doing ever since. The Rock has taken this position to continue these mindless, yet super-fun action movies, because someone has to, and The Rock has the physique and charisma to pull it off time and time again. ‘Hobbs and Shaw‘ is no different and actually tries to be a Marvel movie of sorts with high-tech gear, out-of-this-world stunts, and superhero-like activities, where normal heroes would be dead instantly.

‘Hobbs and Shaw‘ teams up The Rock and Jason Statham again as a virus is stolen that will turn your insides into a liquid soup and kill you. If the virus falls into the wrong hands, it will go airborne and affect the world population within a week. It just so happens, the wrong hands get a hold of this virus, led by a mysterious voice we cannot see and a half-human/half-machine guy named Brixton (Idris Elba), formally partners with Shaw. Brixton is basically an evil Iron Man with Darth Vader qualities. The virus is inside a woman named Hattie Shaw, who of course is Deckard’s sister. Now the bad guys and good guys want the virus and its up to ‘Hobbs and Shaw‘ to protect her and get the virus out before its too late.

There are four big action sequences here, including a car chase, a big fight scene at a nuclear reactor site, the big showdown in Samoa, and the final fight scene. It’s exhausting too. Running in at 140 minutes, I couldn’t help but think this movie would play better if at least 30 minutes were cut out of the middle. There is just no point to it other than showing a big action scene. In fact, it plays out like the main climactic battle, but then there are over 30 more minutes to go. In between these action moments, we are delivered a series of banter between Hobbs and Shaw and their disdain for one another. There are tons of put-downs and friendly jokes between the two, which again will make you laugh, but wear out their welcome. Rinse and repeat for nearly three hours.

Perhaps the best part of the film is the inclusion of two big cameo roles, who look to be in future films of the franchise. You can probably guess who they are too, being this is a movie with The Rock and the director being David Leitch who directed ‘Deadpool 2‘. These two cameo roles are hilarious and I really hope they receive bigger roles in the next film. The Rock and Jason Statham bring their personalities to the role, where The Rock is a bit on the nose with his comedy. We’ve just seen it too many times in the past for it to be original or highly entertaining.

All that being said, ‘Hobbs and Shaw‘ is still a fun movie and deserves to be seen loud and at the theater where you can laugh with your friends throughout. There’s a place for these types of movies and I’m just glad The Rock is still making them, even if they can be a little stale at times.

There are a couple of mid/end credit sequences and for those of you who love WWE – Roman Reigns is in this movie. He doesn’t have any lines of dialogue, but The Rock allows him to do his wrestling moves, including his Samoan Drop, The Spear, and his scream “Ooooooooo-Ahhhhhhhhh”.