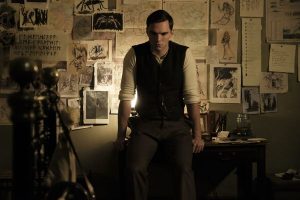 “Even the smallest person can change the course of history.” – Lady Galadriel

Amazing words that continue to inspire people years after John Ronald Reuel Tolkien aka J. R. R. Tolkien’s (Nicholas Hoult) passing. From a very young age, Tolkien was a dreamer. Encouraged by his theatrical mother with her animated storytelling, Tolkien portrays its namesake as a person simultaneously living in two different worlds nearly all of the time. Set in England and France, the viewer gains insight into Tolkien’s beginnings and influences. Books were his constant companion that provided an escape from losing his father and later his mother. It is no wonder that Tolkien went on to write two of the most complex and fantastical books of all time. As an orphan, Tolkien meets the love of his life, Edith Bratt (Lily Collins) and his quest to find love, thrive in college, and eventually establish himself in a career takes off from there. 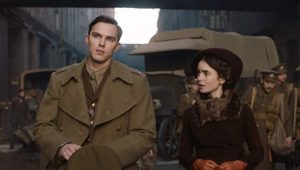 Hoult has a demeanor that is quite captivating, such an interesting combination of innocence and reinforced depths. I have enjoyed Hoult’s performances many times over the years. The first time was as an awkward little boy in About a Boy. Even next to Hugh Grant, Hoult stole the show. Most recently, Hoult has taken innocence and turned it into something sexy and adorable in films like Clash of the Titans, the X-Men series beginning with X-Men: First Class, but Warm Bodies was by far my favorite so far.

Collins, who I first saw in The Moral Instruments: City of Bones, brings the strong yet angelic persona that she performed as Clary. While researching Collins’ achievements, it became apparent that I have watched her for longer than I thought. Back in 2009, she kind of blended into the background in films like The Blindside and Priest. However, in Abduction and The Moral Instruments: City of Bones Collins’ grit came out and her strength was uncovered. The chemistry between Hoult and Collins is palpable, excellent casting.

Many cinematic aspects of Tolkien tied to both The Hobbit and The Lord of the Rings films. From the framing of sequences to the phantom Smaug, Sauron, Ringwraiths, etc. fading in and out of his war-torn battlefield. One of my favorites is when Tolkien is in the forest and hides from his friends in a game of capture the flag. The parallels between Tolkien’s real life and the world of Middle Earth are continuous throughout the film.

Tolkien has the duality of being Frodo like as well similar to Aragorn. Bratt, his ladylove, obviously is Arwen. Having the phantoms overlap Tolkien’s real-life journey was a brilliant and poetic addition to push the narrative. The score was a battle between light and dark just as his life and the books are. If you have any interest in knowing the man behind the Fellowship, you will love Tolkien.