“It’s a film that crawls under your skin, but in a great way.”

At some point in all our lives, we’ve all daydreamed of sitting on the couch for days on end without a care in the world, a bill to pay, and appointment to make, or someone to answer to. All we want to do is watch television or in the case of Joel Potrykus‘ new film ‘Relaxer‘ – play video games all day. Set in 1999 and all on a unkempt couch, we meet Abbie (Joshua Burge) who acts much younger than he is and would rather play video games rather than clean himself or meet people outside of his house.

His older brother Cam (David Dastmalchian) keeps on posing challenges for his younger brother by way of beating video games, drinking concoctions of milk, which he vomits up often and even more degrading challenges, which Abbie ultimately fails. It’s never revealed why Cam decides to import a level of torture towards his younger brother, but we can guess. With parallels to the Y2K scare and a notion that their father will be returning home from prison at some point, Cam decides to give Abbie one last challenge – beat the video game Pac-Man, which if you’ve seen any documentary or even played the game, it is a very challenging feat – almost impossible. 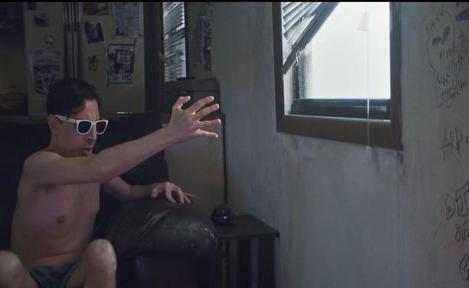 The catch is that Abbie cannot leave the couch for anything until he beats the game. This is where things get funny, yet sad as Abbie tries to think how to eat, drink, use the bathroom, and more live normalities. In the back of everyone’s mind, but not in Abbie’s brain is that there is a glitch in every Pac-Man game where if you get to the last level, the game turns off and you can’t even win the game. ‘Relaxer’ is ultimately a sad movie, because we all know someone like Abbie and Cam, at least some point in our lives. This somewhat claustrophobic film, which again is all set on the couch, watching a lost young man try to impress his non-existent bother can be difficult to watch, when all he has to do is “cheat” his way through the game and get up and enjoy life, but instead, he’d rather torture himself to gain whatever respect he has left.

Potrykus uses his camera for long dialogue shots and different angles to keep things lively, but if you have a weak stomach, your gag reflex will work overtime in this film. ‘Relaxer‘ is trip back to 1999 into a the mind of a childlike adult who has no other ambition than to gain the respect of his brother. He’s willing to do anything to get it, even it means doing nothing. It’s a film that crawls under your skin, but in a great way.